Battlefield: Hardline was probably a bad idea from the moment it was conceived, but the unambiguous depiction of police violence has become particularly egregious in the months since Ferguson. EA and Visceral Games have taunted the public throughout the buildup to today’s launch – the “Be the law, break the law” tagline makes me want to drive my head through drywall – and the insensitivity has only accelerated since last week’s Polygon interview, which was disheartening in a way that makes me question the integrity of the industry.

“We had to make sure the bad guys felt like bad guys so the player isn’t as emotionally conflicted about the gameplay,” said writer Rob Auten, shortly after explaining how his team casually discarded the bad guys’ girlfriends to make them seem less human.

Though I always try to reserve judgment until I’ve played a game, preconceptions inevitably form when presented with such arrogance. I haven’t played it yet, but I have little hope that Hardline addresses the issues with the nuance they deserve.

But I knew that already. That’s not what makes me uneasy about that interview.

No, what’s troubling is that Auten’s philosophy makes sense a certain amount of sense. Battlefield: Hardline was always going to come across as tone deaf and it was likely much too late in development to change course. If it’s too late to fix the problem, doubling down and owning the problem is better than pretending to be something different. At least Visceral isn’t misleading its audience.

More to the point, Auten’s comments display a solid understanding of motivational psychology. If the goal is to deliver guiltless entertainment, that’s a good way to go about doing it. The team’s actions probably created the desired effect for play testers.

That only makes the outcome more distressing. Visceral is parading the violence in Hardline as a bit of harmless fun while detailing the explicit steps it took to eliminate empathy. Auten’s team erased natural social bonds to make it easier to justify murder, an act that is borderline psychopathic and absolutely sends a message to the player.

I doubt Auten’s team takes that view of its script, but the charitable alternative isn’t much better. In that scenario, the game’s tone-deafness results not from poor execution as much as from lack of effort and a complete abdication of responsibility. A game that treats real-world criminal justice as a toolbox needs to have a stance on the subject, but Visceral is apparently too lazy to bother.

The studio is hoping that we are, too. Visceral doesn’t want us to realize that the murder of civilians is the primary form of interaction in Hardline, so it’s burying its head in the sand hoping that the criticism will stop if it ignores it hard enough. It’s PR as performed by the ghost of E3 past, and it might have worked as little as two years ago.

Now, it just looks like Visceral doesn’t have the ethical convictions to stand behind its product, trafficking in violence and claiming it’s safe for kids, like a drug dealer selling cocaine hidden inside Pixy Stix. Auten’s team tried to strip the game of the context baked into the premise, pretending that the targets are not human even though that proposition is fundamentally untenable. The avatars in Hardline are human and the audience relates to them as such.

That can’t be overemphasized. Every cultural artifact is shaped by and influences the broader culture, so perceptions matter. You can make a mindless shooter – I’ve certainly enjoyed my share of them – but games have an impact and it’s important to be cognizant of that to avoid causing harm.

Visceral doesn’t seem to have given that a second thought, which is why Auten sounds like he knows what he’s talking about despite completely missing the point.

“In some cases we made [the criminals] too charming and people felt bad about shooting them or wanted to hang out with them instead of fighting them and that is no good,” he told Polygon.

Setting aside that socializing is generally healthier than fighting, what Auten conveniently overlooks is that yes, criminals are people. That is precisely why we’re inclined to relate to them and feel bad about shooting them. Many criminals have girlfriends (or boyfriends) and may be fun to hang out with because humans are social creatures. We are able to empathize because we can comprehend complex relationships and motivations. It’s a natural process that is crucial for a nuanced understanding of civilization.

Hardline is actively working to forget that while asking the rest of us to do the same. I can’t because ‘criminal’ is not a black and white designation and the law is not always the most accurate barometer of human decency. A bad law will make the good seem bad (and vice versa), a truism that has been explored in countless hours of film and television.

I don’t expect Battlefield to offer a thesis on criminal justice, nor should it have to. Again, mindless entertainment is OK. But it takes a lot of smart people to make dumb pop. Games like Bulletstorm are so implausible that they have little bearing on planet Earth, while franchises like Call of Duty and Grand Theft Auto have at least winked at the barrier between realistic and cartoon violence. Most have done so imperfectly, but there is a willingness to enter the conversation. 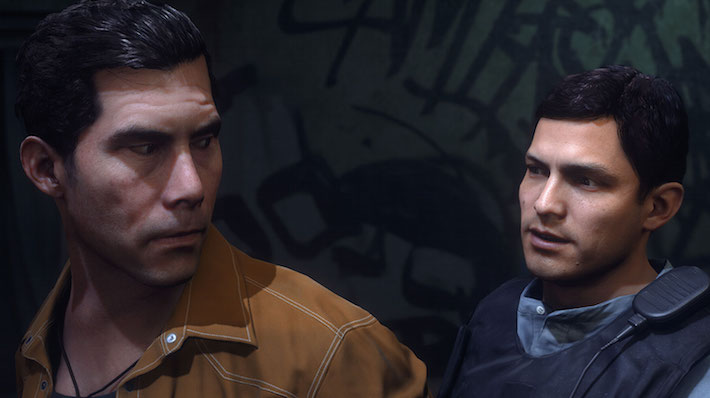 It’s not unreasonable to ask Visceral to acknowledge that Hardline depicts conflicts that have real consequences for real people. That is the bare minimum required of any entertainment producer, and the fact that Hardline is trying to wash its hands of even that most basic level of self-awareness is cowardly, despicable, and entirely too familiar.

The Polygon feature is so troubling because it demonstrates that major gaming studios would rather cling to ignorance than exercise civic responsibility. That isn’t surprising, but it is depressing, and we’re well past the point where such behavior is acceptable.

Battlefield: Hardline does not get to be a mindless shooter because ‘cop’ is not a mindless profession. It is (or should be) a difficult job with an extraordinary amount of responsibility because lives hang in the balance. Police work requires discretion. Whether or not it gets applied is another matter, but reducing law enforcement to mindless gunplay dehumanizes people on both sides of the conflict.