I want you to take a trip back in time with me. No… no, okay, come back. You seem to have gone too far back and are now thinking about 80s dinosaur movies. I want you to go back in time to 2008. Do you remember that year? Flo Rida (that’s flow-rye-dah, not Florida, as twenty-year-old Elena thought) recounted a tale of a lass with fur-trimmed boots, and Tina Fey got her big break-out role lampooning the flower of Alaska, Sarah Palin. Another notable thing that happened in 2008 was the premiere of True Blood.

Unlike silver screen incarnations of vampires, HBO’s True Blood was set in the rat-tail filled deep American south. Despite the legion of insanely beautiful actors hired to bare their bodies on the show, a large part of why True Blood became so successful is because it shined a light on the un-sexy realities of what it would mean to be immortal. After so many years of seeing vampires as Adonises, here was a show that explored what would happen if average folks like your accountant or grandmother were overcome with bloodlust. While showrunner Alan Ball’s campy humour and penchant for arousing-yet-grotesque sex scenes made it memorable, the show was at its peak in quiet moments between characters that just happened to be vampires.

Okay, so it was also good anytime Alexander Skarsgard was on screen

The blend of human and inhuman struggle that True Blood perfected is best displayed in the relationship between Jessica (Deborah Ann Woll) and Hoyt (Jim Parrack). When Jessica loses her virginity to her beau, viewers can relate to her apprehension and fear having gone through the universal experience. At the same time, however, the show intelligently introduces a distinct vampiric element to the mix, suggesting that Jessica would always experience pain during intercourse because her body heals after an injury. Despite not being a vampire, the audience can empathize with the frustration such a revelation would bring.

The couple’s break-up in season 4 is similarly well crafted. While Jessica wants to leave her boyfriend because she desires to experience what it means to be a wild, unencumbered vampire, the heart-wrenching break-up is handled in a distinctly human way.

In a dream sequence, Jessica pictures Hoyt as a pathetic, groveling little boy she’ll have no trouble discarding.

Much like in the real world, however, the break-up is not as easy or clean as Jessica imagines it will be. Instead of asking for another chance, an enraged Hoyt lashes out at Jessica for not appreciating the difficulties he’s had to endure dating a supernatural girl. While this fight involved vampiric problems, at its heart it was about the relatable feelings of resentment, sexual curiosity, and the fear of comfort and commitment.

So how did a show that displayed such a nuanced understanding of evolving relationships become the incoherent mess we said goodbye to in August? Well, I’d like to think it started off with were-panther rape. Oh, did you block that little event out of your head? Well, you are a lucky bastard because I will never forget the moment my beloved show jumped the shark.

Instead of continuing to explore human emotion through supernatural interactions, True Blood decided to bestow the gift of corny and inconsequential plot points onto its poor audience.

Iraqi fire monster looking for revenge on Terry for some reason? “We’d be stupid not to include that!”

Five thousand new characters that will detract from any development of characters viewers already love and want to know more about? “I creamed my pants just thinking about it.”

The show overcompensated for the insanity later on, mistakenly thinking we gave a shit about the intricacies of vampire bureaucracy, giving us an entire season that occurred in a boardroom. 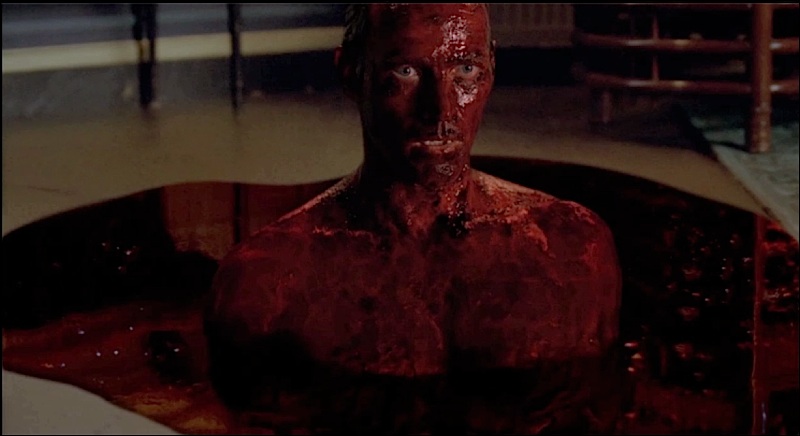 Also let’s not forget BILLITH happened in that boardroom season

While True Blood could not be more different from The Office in terms of setting, tone, and even universes, several parallels can be drawn between the two shows’ declines.

The Office was at its best when it explored the small joys and frustrations of monotonous daily life. Much like the sexy vampire soap,  The Office grew far too distracted with side plots, forgetting to challenge its players in any meaningful way. Once defined by the slow, realistic development of romantic relationships and camaraderie, the show tried to sustain itself on a lean diet of zaniness and guest stars. The result was a real life version of The Simpsons: an excuse for one-liners and haphazard story telling.

By the end of The Office, however, the unthinkable had happened: audiences were tearful in letting go of the show. Contrastingly, the resounding response from True Blood fans upon seeing the vampire drama’s finale was “fucking finally”.

So what contributed to the difference in audience response?

Unlike True Blood, The Office responded to criticism and stripped its final season down to the bare bones, human elements that made it a success. Instead of just gloating in their annoying perfection, Jim and Pam tackled realistic marital issues with humour and grace. Similarly, Jim and Dwight came to terms with the fact that deep down they cared for one another, changing their relationship from goofy rivalry to actual friendship. Commendably, the show also addressed its meta mockumentary format and the effect it had on its subjects. In short, the characters stopped being caricatures and grew, much like its audience.

True Blood, on the other hand, remained immune to criticism and plowed through with a tired strategy resulting in a comically disastrous final season that spent most of its time introducing annoying new townspeople and ninjas (true story) we had no reason to care about.

Instead of giving Sookie anything meaningful to do beyond just re-hashing her love triangle (square? pentagon?), creators recycled the same “town vampire whore” storyline we had wrapped up years ago, making us forget why we even liked Sookie in the first place.

Sadly, Sookie’s storyline wasn’t the only one to be tied up with a bow made of crap.

Any responsibility Tara and her mother had for their destructive relationship was poofed away by the introduction of an abusive dream sequence dad we’d never heard of before. Instead of addressing the Eternal Sunshine-like reunion of Jessica and the glamoured Hoyt, the couple just got married a few days after becoming reacquainted again. Rather than face his constant need for a warm body, Jason magically ended up with a new girlfriend that came out of nowhere. Disappointingly, fan favourite Lafayette received a big bag of nothing as his send-off while Bill got 5000 pointless Civil War flashbacks. Oh, and let’s not forget that Bill made Sookie kill him because he wanted her to have babies, solidifying his status as a paternalistic jackass. Seriously man, can’t you keep your vampire dick in your pants and just leave her alone? Maybe leave the country forever so that Sookie can find a new guy? Or talk to Sookie about adoption? Or hell, let her decide what she wants for her own life? (I know, it’s an insane suggestion).

Practically the only aspect that was well done in True Blood’s final season was extended screen time for the ever-delightful friendship between Eric and Pam.

The lessons here for showrunners who want to earn back the goodwill of their audience?

Go back to your roots and get in touch with what made your show so beloved in the first place. Listen to your fans and don’t just try to superficially please them. Never use your characters as plot devices to get you from point A to point B. Understand that the addition of new characters doesn’t make your show better. And for the love of god, never include were-panther rape in your show to teach a character a lesson about loving his dick too much.