I have a confession to make. I’ve never been a fan of Souls, which is to say that I’ve never been able to get into Dark Souls and the related line of products. I made a serious effort with Bloodborne, and while I can appreciate many aspects of the design, some of the core elements were too vindictive for my tastes.

That’s what makes my love for Nioh so unexpected. The latest game from Team Ninja cribs off of From Software in some obvious ways. The monsters respawn every time you visit a save point. Those save points are few and far between. You lose all of your experience points whenever you die, but you can get those points back if you return to your grave before you die again. Team Ninja clearly wants to syphon off some of From Software’s popularity, so it made a game that invokes everything that people like about gaming’s most notorious death machine.

Yet despite the similarities, Nioh has clicked for me in a way that Bloodborne never did. It’s the kind of game that I’ll play for three hours before realizing that I should have stopped to eat dinner an hour ago, at which point I’ll start another mission and forget to eat until midnight. I don’t think there’s any great revelation to be found in the narrative, but I can’t stop playing and I don’t think that’s a coincidence.

I haven’t finished Nioh, so this is not a comprehensive review. I’m at level 62 and I’d guess that I’m a little more than halfway through the main campaign (Nioh is absolutely massive). However, I have played enough to know why I’ve fallen for Nioh when I was so indifferent to Bloodborne. The former does several concrete things that make for a better (and more accessible) experience, so with that in mind, here are three reasons that Nioh is better than Bloodborne: 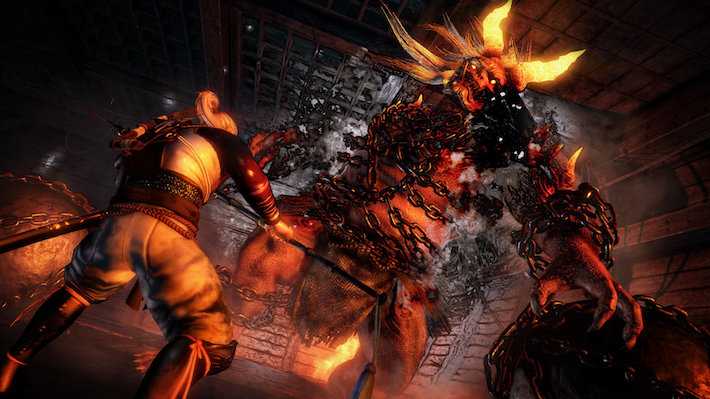 Everyone knows that Bloodborne is hard, and I can certainly understand the appeal of a difficult game. I enjoy a challenge as much as the next gamer and I’m no stranger to trial and error.

The catch is that I want to feel like I’m making progress, and in that regard Bloodborne’s approach to boss fights is infuriating. Most of them are a ten-to-fifteen-minute hike from the nearest save point, which forces you to repeat the same stretch of gameplay over and over and over again just for the privilege of going up against an even more dangerous opponent. Since there’s no real way to shorten that trip (especially if you need Blood Vials), Bloodborne often felt like it was deliberately wasting my time. The game became stagnant, and that’s when I stopped playing.

Nioh has no such problem, and that alone is enough to separate the game from its From Software predecessors. Nioh uses Shrines as save points, and there’s almost always one to be found in the lead up to a boss fight. You can make a beeline straight to the arena if you don’t feel like fighting any of the other monsters patrolling the area.

It’s a minor change, but it has a drastic impact on the end user experience. Whenever I get stuck, I’m able to focus on one specific obstacle without having to devote resources to problems I’ve already solved. It’s a much more satisfying feedback loop because you’re always dealing with a fresh challenge. Bloodborne imposes a tax for having the audacity to play it. Nioh does not create the same sense of sheer, impotent frustration.

Most of Nioh’s other advantages are variations on that same theme. The game has more respect for my time and my intelligence, and that makes me want to invest more of my own energy. That’s particularly true when it comes to player education. Put bluntly, Bloodborne’s user interface is a disaster. I couldn’t figure out how to equip a weapon when I first started playing, and I’m not the only person with a similar tale of woe.

Bloodborne wants you to figure things out for yourself, and I know some people like those kinds of emergent systems. Unfortunately, Bloodborne is aggressively obtuse. The tutorials are useless, the menus are unintuitive, and in most cases you don’t even know enough to ask the proper questions. That’s the kicker. Bloodborne can’t be bothered with the most basic fundamentals. As much as I love the scientific method, you can’t conduct experiments when you don’t know how to use the equipment in the lab.

Nioh is far more welcoming. The game provides no less than three separate combat tutorials, and you can scroll over anything in your inventory to learn more about the specific effects that, say, a weapon attribute will have on your character. The game accomplishes that without sacrificing any depth. Nioh blends multiple weapons, fighting styles, and stances with a robust crafting and prestige system that allows you to customize your character in a variety of ways. Each option feels distinct, but it’s never overwhelming because the game establishes a shared base of knowledge and then builds from there.

It also holds your attention along the way. Not once have I felt the need to run to the internet to figure out how something is supposed to work. If I have a question, Nioh provides the answer, which keeps me at the console and encourages me to tinker with the materials at hand. I’m not worried about wasting items that are going to be important later. Experimentation is more important in Bloodborne, but I’ve done more of it in Nioh and I’ve been more satisfied with the results. 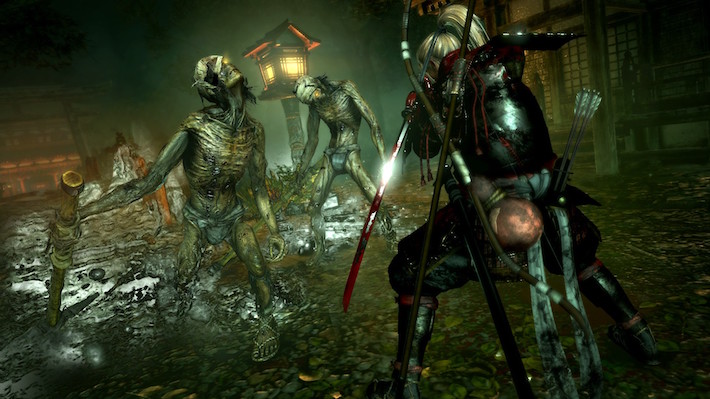 Like Bloodborne, Nioh can be unforgiving. Most of the enemies are powerful enough to kill you in two or three hits, so fighting individual monsters is much smarter than trying to fight a mob.

That dynamic manifests in different ways in the two games. Nioh revolves around its excellent combat system. The pace is much faster, and there’s a greater emphasis on the enemy than the environment. I’ll usually try to lure opponents into open space to give myself more room to maneuver.

Bloodborne, meanwhile, is an interlocking puzzle that happens to have some monsters in it. Much of the thrill comes from figuring out how the unique pieces fit together. Your reaction times are slow and your movements are cumbersome, which means there’s always a degree of risk in even the smallest encounter. As a result, the game discourages open confrontation. You’re supposed to find the cracks in the world, the spots where monsters get trapped behind doorways and bits of scenery, and to use every one of those tricks to your advantage.

That kind of design rewards careful study, but you stop learning once you’ve figured out the most effective techniques. That becomes tiresome with the gameplay repetition mentioned above. Many of the best tricks rely on circumstances beyond your control, forcing you to wait for enemies to get into the proper position. No matter how well you know the game, you have to wait for it to come to you, so there’s not much you can do to make the process more expedient.

Nioh is a much sleeker game with precise combos and a lot of evasion. The more you play, the better you get, and the faster you’re able to cut through enemies that previously gave you trouble. That’s your reward for mastering the mechanics. Even if you die, you’re still honing your skills and ensuring that you’ll enter the next fight with a little more confidence. There’s active growth even when you’re not leveling up, and that makes for a much smoother overall progression. 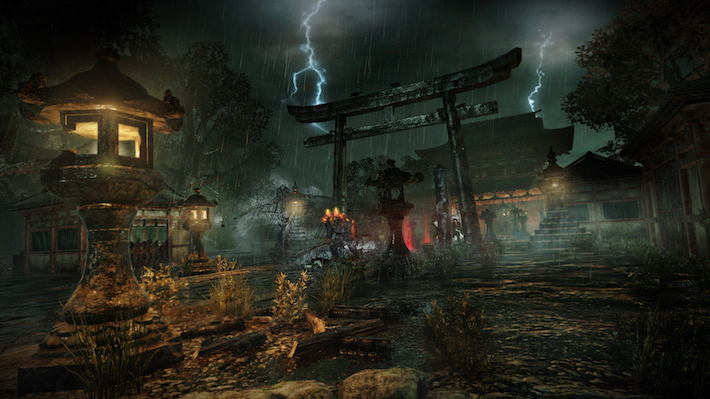 On the Other Hand

Of course, Nioh is not a perfect game, and I am nothing if not fair. There are some things that Bloodborne does better than Nioh, and that list begins and ends with the aesthetic. Bloodborne’s Victorian Gothicism is spectacular. Nioh’s visuals are a little cleaner and the monsters and backgrounds look great. They just don’t create the same oppressive atmosphere. Bloodborne unfolds across one massive, interconnected world that adds a sense of grandeur and gives the mystery a little more weight.

Nioh is divided into separate missions that lack the same cohesion. The game is set during the Sengoku Period in Feudal Japan prior to the rise of the Tokugawa Shogunate. It’s a fascinating historical era, but barely any of the political intrigue makes it into Nioh. Seemingly every cut scene introduces three new characters, and few of them stick around long enough to receive any kind of development. The dialogue is all exposition that doesn’t make the plot any easier to follow, nor does it explain why the developers felt the need to shoehorn a white English protagonist into a samurai game set in feudal Japan.

As much as I love a good story, Nioh is the kind of title that you buy for the gameplay rather than the narrative. The game suggests that centuries of conflict have upset the spiritual balance in Japan, and that evil demons (called Yokai) have come to the surface to feed on that negative energy (or something to that effect). It’s a serviceable premise that gives you an excuse to kill demons. That’s all it needs to be, but it still feels like a missed opportunity. 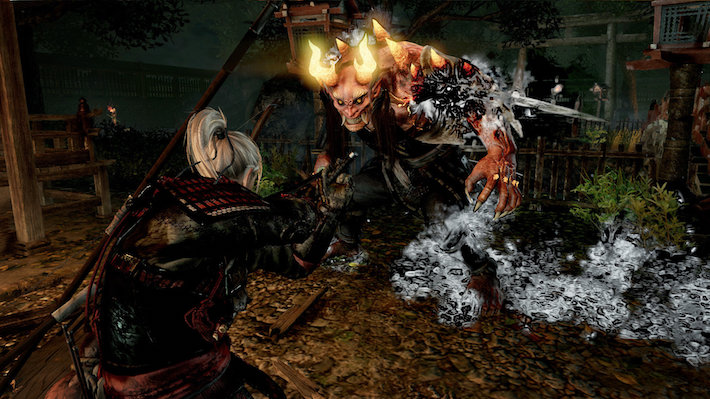 Nioh is essentially a Souls game for people who find Dark Souls too intimidating. That is in no way meant to be condescending. At times, Bloodborne goes well beyond ‘difficult for the sake of difficult.’ The best content is hidden behind a knowledge gate that dares people not to play, and that is simply bad design. I genuinely wanted to like Bloodborne. The game didn’t seem to share that sentiment.

Nioh is still ruthlessly difficult, but it does away with most of the arbitrary bullshit. Team Ninja wants more people to play the game, so it shows you the stuff that it thinks you’ll like and provides you with a little positive reinforcement to convince you to use it. That makes the game a little more inviting, and there’s nothing wrong with a game that wants to put its best foot forward.

If you’ve ever wanted to try a Souls game, then I recommend you start with Nioh. The game is an absolute blast, and finally delivers a challenge that’s worthy of my time.

Disclosure: Our review copy of Nioh was provided by Sony.