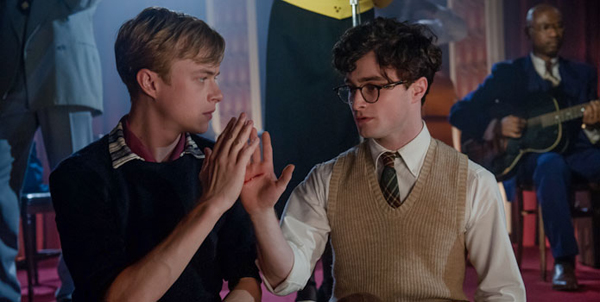 Kill Your Darlings is the latest in a recent line of films about the poetic and enigmatic beat generation. Films like like Howl and On the Road portrayed their subjects (Kerouac, Burroughs, Ginsberg et all) like gods, Krokidas’ film focuses on one of the generation’s lowest moments, making it sound like a fresh new verse.

Allen Ginsberg (Daniel Radcliffe) has been accepted to Columbia, leaving his parents and he becomes immediately uncomfortable by the rigid academia. Lucien Carr (Dane DeHaan), a radical and flamboyant soul, introduces Ginsberg to the undercurrent and the people who will join together in establishing a legendary counterculture. However, it’s also sets the stage for the murder of Carr’s lover, complicating an already complex chapter of Allen’s life.

It’s incredibly charming to see rookie versions of beats making mischief, but it’s also refreshing to see them humbled. There is a moment when Burroughs, (done amazingly by Ben Foster), who’s usually depicted as a Cheshire cat in cinema, is barked at by his father and he winces, something I can’t recall ever seeing. For being confident enough to humble old legends, Kill Your Darlings succeeds, even if it is being crafted to appeal to a more modern demographic. (Zack Kotzer)