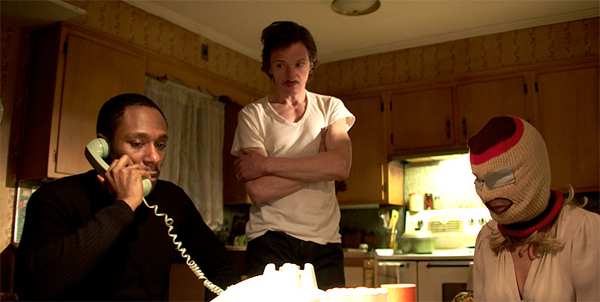 It’s been a long time since Elmore Leonard was treated well on the big screen. Back in those innocent iPod-free days of the 90s, the author’s books became brilliant crime comedies like Get Shorty, Jackie Brown, and Out of Sight. Since then things have been a little rough, but thankfully TIFF’s closing gala Life of Crime does Leonard right shortly after the author’s unfortunate death. It’s actually somewhat of a prequel to Jackie Brown, with Mos Def and John Hawkes stepping into Samuel Jackson and Robert DeNiro roles for one of the wacky early adventures that made them besties. Like all good Elmore Leonard joints, it’s a comedy of errors about criminals and scumbags getting themselves into ridiculous situations that they can’t control.

Def and Hawkes decide to kidnap a dirty millionaire’s (Tim Robbins) wife (Jennifer Aniston) and hold her hostage for sum of $1 million. The only trouble is that Robbins is planning on divorcing Aniston anyways, so he’d actually appreciate her being murdered. Toss in a one-eyed, gun-loving, neo-nazi partner and you’ve got yourself a damn good time. Writer/director Daniel Schechter does well by the patented loose rhythms and perverse character comedy that made Leonard a legend and he cast the movie exquisitely, especially the lead duo. It’s ultimately all just a little fun with an earned R-rating and stylish dialogue. You know, just like a 90s crime comedy. Thankfully, there aren’t many of those these days, so even at its most average moments the flick at least works as a nostalgia piece. You know that expression, “they don’t make em’ like this anymore?” This is what people mean by that.  (Phil Brown)