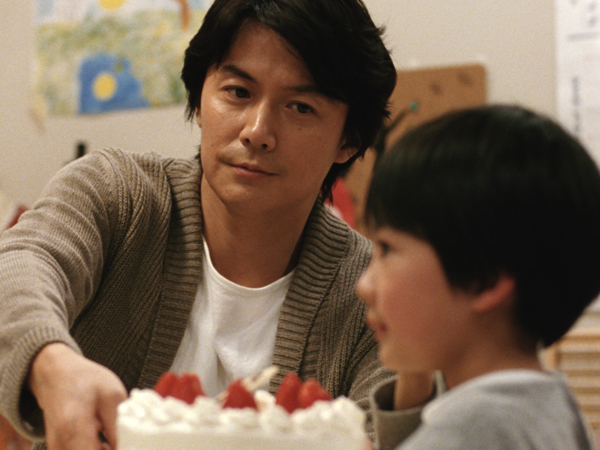 Ryota (Masaharu Fukuyama) and Midori Nonomiya (Machiko Ono) are a hard working professional couple who live with their only child, Keita, in a modern Tokyo high-rise. After the hospital delivers the shocking truth about their son being switched at birth, the Nonomiyas suddenly find their lives drastically altered. Their birth-son, Ryusei, is being raised by the easygoing Yudai (Lily Franky) and Yukari Saiki (Yoko Maki). In stark contrast to the Nonomiyas, the Saikis and their three children live in a modest apartment above the family’s appliance shop. Both couples are hesitant to force an abrupt emotional change on their families, but soon begin socializing, including swapping boys on weekends.

The winner of the Jury prize at Cannes this year, Like Father, Like Son is a thoughtful, methodical and serious examination of a concept usually played humorously. Fukuyama delivers a mesmerizing performance as the over-achieving Ryota, a father who while working to better his family’s situation has managed to distance himself from everyone around him. His work is nuanced and largely internalized, but displaying lots of confusion, doubt, and pain in his facial expressions.

The film does carry some pacing issues, and it takes a very long time to start getting to where it needs to go, but audience members that can stay with the film should leave very satisfied with a thoughtful and well-earned finale. (Kirk Haviland)