Considering that the major showpieces of this year’s opening Short Cuts Canada program are a restorations of a pair of iconic national classics, it only stands to reason that the rest of the films should fall in nicely behind them.

Recently restored to its 3D glory for the digital age, Norman McLaren’s stereoscopic opus Around is Around was the first ever animated film to use the technology in full. It’s new sheen looks positively gorgeous, and it comes paired with a restoration from McLaren protégée Evelyn Lambert, O’ Canada, a picaresque postcard to the nation.

The Canadiana doesn’t stop there, it only grows weirder and even more daring with Matthew Rankin’s wonderfully titled Mynarski Death Plummet (which I am totally nicking for my next metal band). A historical, avant-garde mindbender that suggests what might happen if Guy Maddin stole a screenplay intended for Michael Bay, this visually dazzling entry tells a variation on the story of Canadian World War II hero (and Winnipeg native) Andrew Mynarski. Blending practical effects, in camera tricks, painting of the negative, digital enhancements, and any other filmmaking trick in the book, this one is a real blast.

Also visually adept is esteemed Canadian filmmaker Denis Poulin’s collaboration with Martine Epoque on Coda, a blending of movement and stylish visuals to retell the climactic parts of Stravinsky’s “Rite of Spring.” It is what it is, but the visuals and music mesh perfectly.

There are two less successful shorts in the program, though, one disappointingly from Andrew Cividino, whose We Ate the Children Last was one of the best shorts of 2011. His coming of age in a small town tale Sleeping Giant might be a bit too loose and observational for its own good. The story of a trio of teenage boys who keep daring each other to do dumb shit and how they get torn apart by a girl that’s interested in one of them, vacillates between nailing the minutiae and mundane hangouts of real life and not knowing where it wants to go when the inciting incident of the piece happens. It’s okay, but a bit too aimless and the ending is kind of abrupt and sour. 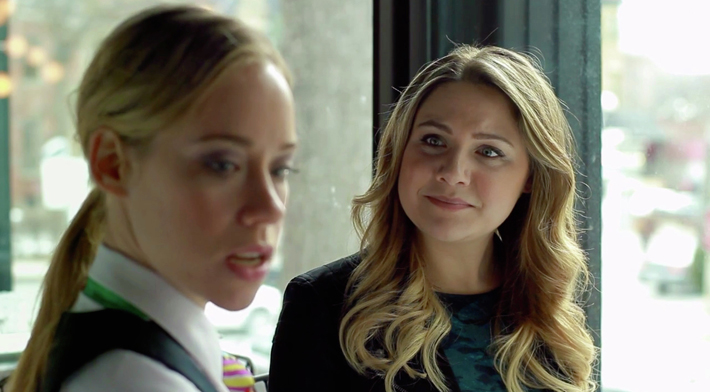 The other slight disappointment is the moderately amusing Zero Recognition, a collaboration between former Degrassi: The Next Generation actors Ben Lewis and Lauren Collins, the latter of whom plays a fictionalized version of herself that monologues about how hard it is to be on the internet and date when she’s recognizable if not necessarily famous in the traditional sense. It’s definitely coming from a decidedly privileged perspective, so it’s a shame that this couldn’t have been developed beyond more than just a single date that she has with a doctor (played by Lewis). There are a few chuckles, but it doesn’t have a lot to say other than how hard it is to date people (or take them at face value on the internet).

There’s also a great pairing of shorts in here about middle aged people realizing that life isn’t all it’s cracked up to be that make up for the younger folks almost striking out. In Sarah Galen-Davis’gorgeously shot An Apartment, Bruce Hunter stars as an unemployed 55 year old with limited skills and inability to hold down a job who’s forced to move in with his kindly younger brother. It’s low key and a little episodic, but it actually builds to something grand to say about growing old and the fickle nature of the North American dream. There are definitely shades of Thomas McCarthy’s work here, and Hunter is exceptional.

A bit more off kilter and a little more thematically deep is Vincent Biron’s A Delusion of Grandeur (Un idée de grandeur), the tale of a recently defeated incumbent mayor who has to figure out where he wants to go next in life. What starts off as a story of a man picking himself up from the loss of his job leads somewhere completely unexpected. I wouldn’t dare spoil it, but I will say that it’s very funny and surprisingly thoughtful.