Another season of Orphan Black wrapped this weekend and one character who has truly blossomed has been Alison’s suburban hubby Donnie, played by Kristian Bruun. The once-monitor, accidental killer and novice drug dealer has been slowly but steadily finding his mojo, even if it’s costed him a couple punches to the face and almost getting his nose cut off in a paper trimmer. The thrill of dealing pills to the neighbourhood seems to have done wonders for Donnie and Alison’s marriage while also providing some comic relief from all the other clone drama. In a way, Kristian has become like the fun ‘weekend dad’ who Tatiana Maslany gets to play with when she’s not dealing with Sarah’s mission, Rachel’s rehabilitation, or Cosima’s illness.

But there’s a lot to more Kristian Bruun than just Donnie Hendrix. Sure it’s the role that has already immortalized him both in comic book and gif form, but in an extended conversation we learned quite a few interesting things about the Toronto-based actor. Here’s 10 of them. 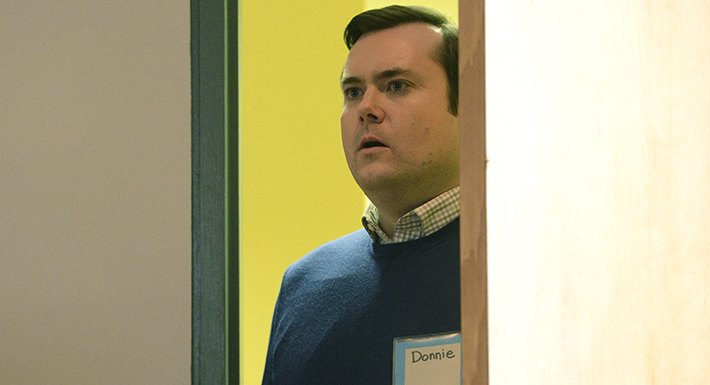 Back in 2012, when BBC America was casting the first season of Orphan Black, Bruun was busy with a starring role in a British play called Eigengrau.  Auditions for Donnie were being held during tech week, which is when everyone needs to work extra hard to make sure the play is the best it can be when it opens, so Bruun told his agent absolutely no auditions that week. Fortunately for him, they couldn’t find anyone who fit the part in their first round of auditions.

When the role came across his agent’s desk again, Orphan Black was already in full production mode on episode 2, Eigengrau had just opened and Kristian had his days free. He had the audition confirmed right before an evening performance, and only had a couple hours that night to learn three scenes for the audition the following morning, including infamous glue gun scene from episode 6. He credits the play with having him ‘in good acting shape’ and he booked the role on the spot.

2. He loses weight between seasons

While the play may have had Kristian in good acting shape, he had decided to let himself gain almost 15 pounds to portray the ‘fat bloke’ he was cast as. This is the weight that he was at when he was booked for “schlubby” Donnie, not realizing he was committing to that body type for several years. After every season he hits the gym to get rid of his “Donnie boobs”, but he admits that this is getting more difficult as he gets older, but has actually found the trendy Paleo diet to be very effective.

3. He has his own cock sock

For those unfamiliar with how nude scenes are usually filmed, male actors will often have to wear what’s referred to a “cock sock”. This is a nylon bag that you put your junk into and secure it by tightening a string at the top. Bruun describes the routine that’s become old hat to him: “When you get there they’re like ‘here’s a ziplock bag, there’s a bunch of different cock socks in there of various sizes. just take that into the change room and pick which one you want to wear.'” Bruun can avoid this in the future, as all of the actors in How To Plan An Orgy were given their own personalized cock socks.

If you recall, you see a lot of Kristian in episode 9 of season 2 when Donnie and Alison have sex in the garage after burying Leekie. At the time, they thought a thong would be sufficient to make him look naked under his shirt, “but in the motions of my passionate love making, the shirt was bouncing up and you could see the ’T’ bar at the top. Some visual effects artist had to zoom in on my ass and go frame by frame and digitally remove my thong from my ass. They literally spent a week working on that. She went to Jeff Scott and said ‘that was the worst job I ever had to do.’”  This could have been avoided had they only used a cock sock.

4. He went to Military School in the states on a trumpet scholarship

Growing up, Kristian was always a big music nerd. He started playing violin at 3 and has been reading music as long as he’s been reading English. His family has a strong military background and he was looking for something outside a normal Toronto high school experience, which is how he ended up at the Valley Forge Military Academy in Wayne, Pennsylvania on a trumpet scholarship.  In addition to marksmanship and regular classes, he would practise trumpet three times a day, and played concerts all around the U.S. and Europe. 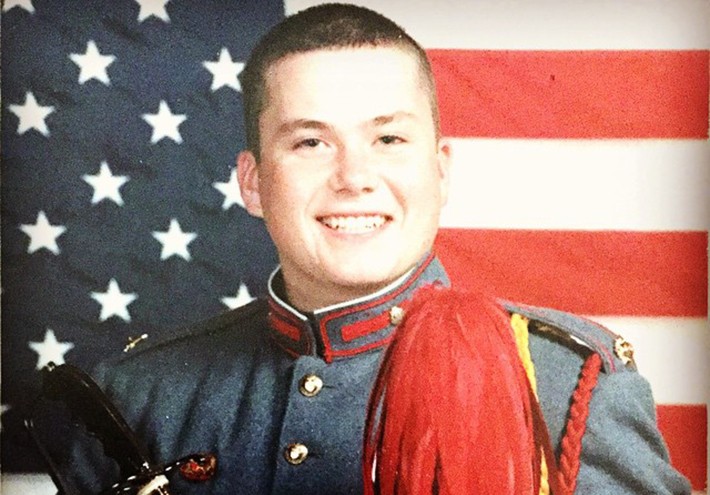 After Valley Forge Bruun attended Queen’s University where he enrolled in physics and planned on joining Canadian Army as an infantry officer, hoping to be airborne and do U.N. peacekeeping missions. He auditioned for a comedy show on a dare, “and that kind of changed everything. I thought if I’m going to spend four years as a civilian before I join the army I’m going to enjoy my degree, because physics was not cutting it for me. I really hated it. I had switched to classical studies because I liked archeology, but really I liked Indiana Jones and Jurassic Park.”

Before enrolling in Queen’s, he didn’t even know theatre was an area of study, but ultimately ended up getting a degree in Drama before attending George Brown’s intense 3 year theatre training program. He attributes the Military Academy with shaping and informing his life more than any other school, and still plays several instruments including guitar and mandolin.

5. He credits a lot of his career drive to an offensive actor joke someone made when he was starting out

Kristian was at a posh Christmas party right after finishing theatre school when someone asked what he did for a living. He told them he was an actor and without skipping a beat, the man immediately said “oh really? where do you wait your tables?”

“It made me so angry and embarrassed, I was seething and I couldn’t do anything about it. That was my first taste of disrespect for acting. It was a big turning point in the way that I looked at my career. It still makes me mad.”

Kristian has made a career taking just about every kind of role he can get, and has never had to wait tables.

6. He has a fan club who call themselves “The Bruuners”

There’s an unofficial Kristian Bruun fan club who call themselves The Brunners. They’re very active on Twitter and scrounge up any and everything about Kristian and his various roles to share with their followers. Part of their mandate is to one day create a crowdfunding campaign to buy new underwear for Donnie.

“I’m not sure if they’re my biggest fans or friends playing practical joke.” say Bruun, but we count on them to share this list for us, thanks in advance!

7. He had more days on Anton Corbijn’s new film Life than Sir Ben Kingsley did

Anton Corbijn recently shot part of his new film Life in Toronto, which is about Life Magazine photographer Dennis Stock (played by Robert Pattinson) and his relationship with James Dean (played by Dane DeHaan) as he captured some of the most iconic images of the actor.

Kristian plays Roger Love, a junior exec at Warner Brothers whose job it is to make sure that James Dean does everything he’s supposed to for the studio, which of course he doesn’t. He spends most the movie trying to track down Dean and getting in shit by the head of the studio, Jack Warner played by none other than Sir Ben Kingsley.

After the two leads, Bruun had the most days on set out of a cast that also included Joel Edgerton. Life permiered at the Berlin International Film Festival and will likely be at TIFF this September.

8. He has lived in Berlin

Kristian attended the premiere of Life in Berlin but he was by no means a stranger to to the city when he did. In 2006, after getting a Finnish passport through his father’s side of the family, he decided to pack up an move to Berlin. Without any knowledge of German, a place to live, a job, or friends in Berlin, the experience of culture shock and loneliness was yet another formative one. “I hated it at first, and then just fell completely in love with it.” He stayed for about a year and even landed an acting job in a London play for two months.

9. He does regular volunteer work in Sri Lanka

In 2007 Kristian took his first trip to Sri Lanka to help rebuild houses for people displaced by a ruinous tsunami. He recently took his fifth trip there working with organizations like Developing World Connections  and Trip Canada. 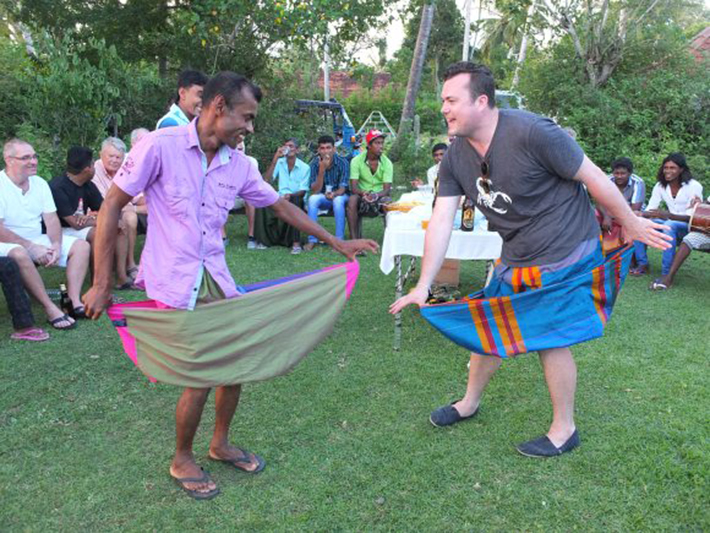 The last few years his trips have been focussed on building schools and creating an infrastructure for education in different communities. This includes giving  kids the opportunity to study for, apply for and go to University, regardless of faith or religion.

In addition to being a music geek, Bruun is also a self-professed comic book and movie dork. Comics he has on his shelf include Saga, Sex Criminals, Ladykiller, From Hell, and of course several issues of the Orphan Black comic book series. He also collects movies, specifically action and Sci-Fi on Blu-ray, and recently picked up the Alien Quadrilogy.