Hello there, loyal readers! Wait… why did some of you make a weird face at the word “loyal”? Is that… what’s that in your browser history? Is that… another Girls recap?

I can’t even believe you would do this. We’ve been together for FOUR weeks. Does that mean nothing to you?

Sorry guys. That was… that was a dark place, but now I’m out of it. Time to catch up with our gals (and guys) on this episode of Girls!

We start the episode off with the funeral of David Pressler-Goings, Hannah’s salt and peppered little publisher. It’s like Four Weddings and a Funeral! Except the closest thing we have to a young Hugh Grant is Adam, who has far too much unfortunate facial hair and far too little British come-hitherness. I tried to Google a photo of Hugh Grant with an Adam goatee, but as it turns out, Hugh Grant’s face is always as smooth as a stripper’s butt cheek. To ease the comparison between the two, I’ve created this handy side-by-side graphic:

At the funeral, we meet a child who is apparently David’s assistant Bob. His glasses tell us he is in a failing indie rock band. Also at the funeral we meet a woman named Annalise played by Friends with Kids director and Hammaconda tamer, Jennifer Westfeldt. Initially, Annalise mistakes Hannah for David’s favourite writer Paige, who apparently had to battle both Tourette’s and obesity. Hannah then unfortunately has to stammer that no, she’s actually the chubby writer, not the obese one.

Now you’re probably wondering who the fuck Annalise is. Well apparently she’s David’s wife. Yes, wife. I don’t think Annalise is supposed to be under the impression that “wife” is a slang term for “platonic roommate that I joke is my ‘wife’ when I’ve had enough wine that I start doing Bob Dylan impressions.”  When Annalise senses Hannah’s surprise at the revelation, she confirms that most people thought David was gay. Hannah then tries to recover by lying that she thought David was so straight that she thought he might actually try and sleep with her. Yep. Because nothing saves face like convincing someone that their spouse might have been a sex criminal.

Hannah being Hannah, makes things more awkward at the funeral by pestering Annalise about the status of her e-book. As it turns out, all of David’s projects have been dropped. The final straw comes when Hannah asks the widow for the number of a publisher that might be able to help her, which Annalise gives in exchange for Hannah’s promise to get the fuck out.

We then check in with Shosh and Jessa, who are having a bit of a scuffle. Shosh is a bit stressed out about the fact that Jessa is constantly in her space, staying in all day watching something called Forensic Files (which is totally not what I would have pegged as a Jessa-show—she strikes me as an L Word fan). Apparently Shosh’s recent peen-jinks (penis hijinks) have really taken a toll on her GPA and she needs to buckle down and study if she wants to stay on track of her 15-year-plan to business womanhood.

Later on in the episode, Shosh starts being the most rational character in the series again. Everyone rejoices. Shosh points out that Jessa needs to get her shit together and improve herself in other ways besides just switching to smoking water vapour cigarettes designed by Stephen Dorff. Jessa decides just then to apply for a job at a baby boutique. We all know how well Jessa’s au pair career went, so this sounds like a perfectly logical decision! One can only hope that Jessa decides to seduce less married fathers this time. Baby steps. Baby steps.

Marnie buys the cutest kitten of all time.

Back at Chez Hannah, our main girl plays Dr. Phil to a dueling Adam and Caroline. Adam’s issue with Caroline? She’s “an evil person who pukes on everything… metaphorically.” Specifically, Adam is exhausted by the fact that Caroline has no drive, no real goals, but somehow a plethora of opinions.

Hannah and Caroline then point out that Adam himself has bounced to and from various careers such as actor and woodworker while dispensing advice to anyone and everyone. Adam retorts that while that may be true, he himself has stayed the same; the same cannot be said about Caroline, who once put on a fake (I assume Appalachian) accent to be a midwife in Montana. Adam is also frustrated by the fact that Caroline creates a victim narrative so that she never has to admit her own shortcomings. 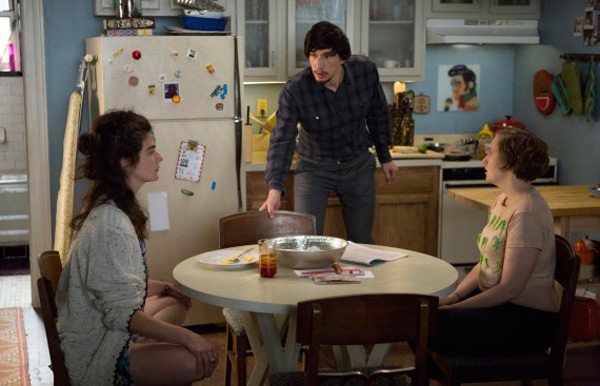 Caroline then proves she is totally sane by accusing Adam of wanting to secretly sleep with her. Dear sweet Jesus, I agree with Hannah that that little Flowers in the Attic moment goes on a list of things that you never, ever say out loud. Other things on that list: Anything that starts with “I’m not racist but…”, “I wonder what my own poo tastes like”, and “maybe I should send that girl a dick pic…” (the answer is always NO, DEAR GOD NO… You really shouldn’t).

Although she does her best, Hannah admits that she is very saddened by the situation between Adam and Caroline. Hannah always wished she had a sibling and can’t understand how a brother and sister could be so awful to one another. This admission explains why Hannah has been trying so hard to repair things with Caroline and Adam. Caroline then apologizes, and agrees that she doesn’t actually think Adam wants to have sex with her in a physical way. Adam rewards the settling of the crazy by telling his sister that he loves her. Awwww. Sorry, Adam, but that’s not enough of a sweet moment to scrub away the fact that in season two this was totally a conversation that you and your sister had: 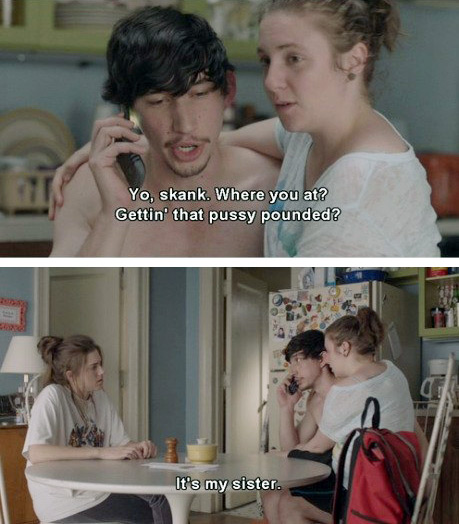 We then check in with awful Ol’ Marnie, who drops by to visit her now no-longer-employer Ray. Now when I say “visit” I actually mean that Marnie comes in and insults Ray by expressing surprise that 1) he does more than write letters of complaint to local businesses, and 2) he lives in a nice place (although she’s quick to qualify that it’s nice for Brooklyn). So, why is Marnie actually at Ray’s? Well, apparently she read my Episode 3.4 recap and realized that she needs to take responsibility for the shitty place that she’s currently in. Since she lacks any ability to be introspective, she asks Ray to tell her what’s wrong with her, as he loves to give out that advice to everyone anyway. Oh. Oh guys… this is so good. So good. Ray then tactfully tells Marnie everything that every viewer is thinking in possibly the most satisfying moment of the series:

“You’re extremely judgmental. You came in here and immediately insulted me and my neighbourhood.”

“You come across as if you’re better than anyone and you want no part in their lives and then when you’re excluded from things you’re outrageously offended. You hold onto this grudge. Also you’re unbearably uptight.”

“And you use people. You use people a lot. You do. So much so that even when you try to connect and be sincere, it comes across as phony. I think that more or less sums it up. You’re a huge, fat fucking phony.”

Adding to the show’s meta awareness of the audience’s perceptions is how Ray comforts Marnie:

“That being said, I still like you. Because behind it all, I think you mean well. And I’m old enough to realize that all of this bullshit comes from a deep, dark, dank well of insecurity. Probably created by your absent father. And that allows you to be a sympathetic character. You are ultimately a good person, Marnie. “

What follows this? A hug that leads to sex. Seriously, Ray and Marnie having sex is a thing that happens. I can’t say I’m too surprised. After all, Marnie and Hannah’s gay ex-boyfriend and ex-roommate Elijah totally hooked up. Hooking up with Shosh’s heterosexual ex seems like a natural step for Marnie. I smell trouble!

Next up, we stop by a new publisher’s office where Hannah is told that she’s just like Mindy Kaling… if Mindy Kaling would ever share a story about choking on a guy’s balls. When Hannah is asked to describe herself, she says that she’s from the Midwest, so she’ll always be 15-25 pounds overweight, depending on how far she lives from the coast. Although the publisher and her assistant laughed (“you’re like Kathy Griffin on truth serum!”), and said they wanted to publish her book, I couldn’t help feeling that Hannah wasn’t totally buying her own shit and that she was acting like someone’s monkey for a few laughs. Damn it, Hannah. Stop being sympathetic.

Oh dear, it was like Hannah heard me, because next up she ‘s a total brat with her dad on the phone. What’s that, dad? You had a procedure to remove some type of mole? Let’s deal with MY BOOK THING first though. What. The. Fuck.

All right, fine. So Hannah is allowed to be upset about the fact that she can’t publish the stories she wrote for three years because they belong to her first publisher, but come on.  Some perspective, please.

When Caroline tries to cheer her up (“you’ll write new stories!”), Hannah doesn’t take it very well. After all, she gave all of her best stories to the first publisher.

All right, I made that last one up. But it was hard to tell for a little while there, wasn’t it?

When Hannah tells her she is unhelpful, Caroline tries to blame Adam for not being there enough for Hannah, which we know is bullshit. As sociopathic as Adam is, he is nothing if not devoted to his girlfriend. This enrages Hannah and she kicks Caroline out of her apartment. Without consulting Adam first. Oops.

Overall opinion: I LOVED IT. I think that Marnie’s interaction with Ray was the key standout. It was a great moment that reaffirmed that unlike Marnie, the show is extremely self-aware. It was also another reminder that Girls is only trying to tell the story of this particular set of women; it never claims to be a picture of what all Millennial women are like. Lena Dunham knows Marnie is shitty. Lena Dunham knows that when Hannah claims she’s the “voice of a generation,” she sounds insane. But honestly: Aren’t we all a little bit awful, uncomfortable, and ridiculous before we become the person we’re supposed to be?

If I could give any new viewer of the show advice it would be this: This show isn’t trying to define you. Damn it, don’t let preconceived notions and resentment get in the way of enjoying universally relatable moments like this.

Favourite line: Goes to Caroline, with: “Where’s Adam? When times are sunny, oh there’s Adam. But when the great seesaw of life throws your cunt in a sandbox, he’s a ghost, nowhere to be found.”