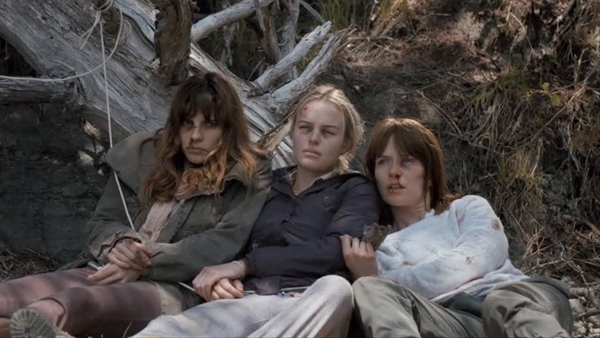 Made by people not generally associated with making intense psychological thrillers, Black Rock stands out as a true hidden gem this weekend. A progressive and bone chilling survival drama with a trio of strong female leads, actress and director Katie Aselton teams with frequent collaborator and screenwriter Mark Duplass (Cyrus, Jeff, Who Lives at Home) for a lean and mean revenge flick that stays true to the mumblecore duo’s roots while delivering the genre goods.

Eternally optimistic Sarah (Kate Bosworth) has brought together her two best friends together for a nostalgic trip down memory lane via a camping trip on an island they used to frequent in their youth. Her friends – the sly, sarcastic Louise (In a World writer, director, and star Lake Bell) and the more uptight Abby (Aselton) – now hate each other since Lou slept with Abby’s potential fiancé several years prior. They put their differences aside (mostly) and try to be amicable about the trip when a mishap with a trio of recently and dishonourably discharged soldiers out for a hunt on the island turns deadly and vengeful, the women are forced to either find a way off the island or kill to survive.

Aselton has clearly studied genre conventions, making sure that the setting itself is as menacing as possible, but she also very cleverly spends the first half hour setting up the characters and the relationships between them. Considering the movie runs a scant 79 minutes, the opening thirty minutes of character development – not just of the leads, but also the villains once they arrive – makes the no bullshit grittiness and unpleasantness of the final hour all the more impactful. It also doesn’t abandon or make obvious who the characters are once things start getting intense. Particularly interesting is how Louise and Abby never fully get on the same page right away. There’s a great scene where Abby blames herself for their situation, and Louise is biting her tongue the whole time to keep from making things worse for the collective.

The film also has an air of unpredictability to it in the way that truly great thrillers keep the audience guessing. Bad things can happen to anyone at any time and people are constantly changing their minds about their actions depending on how rationally they’re thinking. It’s a cat and mouse game where two opposing forces aren’t only hunting each other, but battling with themselves; sometimes with dangerous consequences.

The trio of leads have a natural chemistry around each other that makes their friendships past and present feel lived in and organic rather than just playing archetypes with a list of traits. It’s where Asleton (who also wrote the story) and Duplass (who also executive produces with his brother Jay and Lake Bell) put their low budget comedic and dramatic roots to perfect use. Bell, Bosworth, and Asleton feel like they have known each other for a long time. Their body language and mannerisms around each other telling almost more of a story than the dialogue does. They set things up to a point where it’s easy to be invested in their plight. And when the film puts them in mortal danger, the trio (especially Asleton and Bell) go to some really primal places with their performances. A shout-out is also in order for Jay Paulson as the most manic and unhinged of the gun toting villains.

Black Rock brings more than just efficiency to the revenge movie table. It adds decidedly feminist and character based elements that most of these films tend to lack. It’s a thrilling endeavour from people most wouldn’t expect it from. It won’t reinvent the genre, but of the new releases opening in Toronto area theatres this weekend, it’s the best, hands down.