Here we go again. With the arrival of Captain America: Civil War, we are now THIRTEEN films deep into Marvel’s sprawling cinematic universe. Technically this is the third Captain America film, but with almost every Avenger present and accounted for (minus Thor and Hulk), plus some new ones, this is really Avengers 2.5. Civil War can’t claim to be doing anything fresh or new, and while it stays extremely faithful to the familiar Marvel formula, it still manages to be pretty damn entertaining. I guess if it ain’t broke, don’t fix it.

In case you somehow haven’t been bombarded with all the #TeamCap/ #TeamIronMan marketing, the hook for Civil War is the two heroes butting heads over a new initiative by the UN to govern the Avengers. Wracked with guilt over civilian casualties suffered during the events of the first two Avengers movies, Stark is all for it. Captain America on the other hand, doesn’t trust the agendas of bureaucrats with something as powerful as the world’s greatest crime fighting team. The film doesn’t highlight the differences between Stark and Cap as much as it creates them, but at least it’s an interesting debate with valid points on either side. It’s already a cliche, but the film does address the fallout of the previous films in a somewhat intelligent way… until all the good guys have to fight each other. 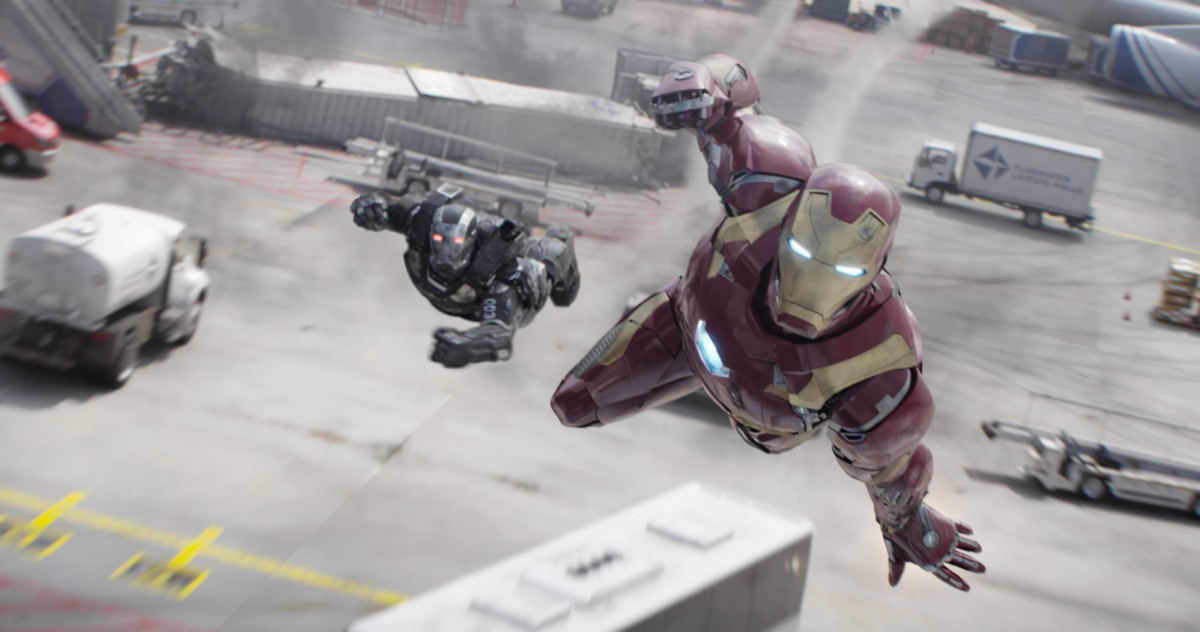 Trailers have already given away parts of the big showdown at the airport hangar. Stark and Cap have both picked their players, and recruited some new ones (Cap takes Ant-Man and Stark brings the new Spider-Man into the MCU). We all know it’s leading to this fight, and it’s a good one, but it’s also pretty dumb. These rational, smart, and extremely powerful allies would certainly find another way to settle their differences before coming to blows, but that wouldn’t be nearly as fun to watch. You get the sense that they’re at least pulling their punches somewhat, but with humans and “enhanced” humans in a big Royal Rumble like this, anything can happen. The most contradictory aspect of this is Stark recruiting the recently bitten teenaged Spider-Man for a fight against half the Avengers. It just doesn’t seem prudent for someone who’s apparently so concerned with the safety of the young and innocent. On the other hand, Spider-Man is dope.

A term you’re hearing more and more with regards to these films certainly applies here, and that’s “shoehorning”. Marvel is known for stuffing as much into their films as possible to help perpetuate subsequent properties. The presence of Spider-Man and Black Panther here certainly epitomize that tendency. Both have upcoming standalone films in development, so Marvel took this opportunity to introduce them to audiences, even though the film already had quite a bit on its plate. Screenwriters Christopher Markus and Stephen McFeely along with directors Anthony and Joe Russo deserve credit for handling the balancing act relatively well. It still gets structurally awkward at times, so when you think it’s over, remember that Marvel is fond of shoehorning in a fourth act.

It’s odd that the Russo brothers have become the Captain America guys, given that their background was in comedy and Steve Rogers is definitely playing on #TeamHumorless. Joss Whedon managed to make him funny in the first Avengers film with some good “man out of time” bits, but that schtick has been all but dropped since. Fortunately you can always count on Stark for some good one liners, but the big laughs this time come from Spider-Man and Ant-Man, who make the most of their limited screen time. Clearly the Russos have ingratiated themselves to Kevin Feige and Marvel studios, as they’ll be directing Avengers: Infinity War, which is a two parter. Yes, the guys who’s biggest film before making Winter Soldier was You, Me, and Dupree have managed to inherit the world’s biggest Yodaless franchise.

Warning: below contains spoilers with regards to what DOES NOT happen in the movie.

Many have called Marvel out for their refusal to kill off characters of any consequence, but with the promise of stakes being raised here, everyone thought Civil War would address this. Well, it doesn’t. We were led to believe the events of this film would move and shake the MCU, but it was more of a nudge. There are some small reveals and not everything is resolved, but really the biggest spoiler here is that there are no spoilers. They already gave away what would have been the biggest and best one when they showed Spider-Man in the trailer.

If you’re just looking for your summer Marvel fix, Civil War definitely delivers, and at least you can go in knowing it won’t be as bad as Batman v Superman: Dawn of Are You Fucking Kidding Me With This Shit? What Did I Just Watch?