A hundred years who, “Til death do us part” meant when someone keeled over from pneumonia at a ragged thirty-years-old. Forty-five, tops. With longer life expectancies, for those of us privileged enough to entertain the idea of marriage, we are looking at sixty plus years with one person who, in the traditional sphere of marriage, is meant to be all things all the time.  In the monogamous set-up this one person you find yourself hitched to is meant to offer you total sexual and emotional fulfillment until you kick the bucket.

Is this a realistic expectation? Can one not argue that marriage can be, quite bluntly, between more than two people? Just because you take off your pants with more than one individual does that negate the deep connection you have with a lifelong companion?

Claire and Frank’s partnership runs deep. They’ve been economically, politically, and socially intimate for almost three decades. But what of love? Tom’s words strike a cord with Claire, because she knows the language of love is one of many tongues.

Chapter 50 of House of Cards is unusually romantic, that is to say, the show is not oft romantic and this romance is what some may consider unusual: an ode to the love between man, woman, and man. 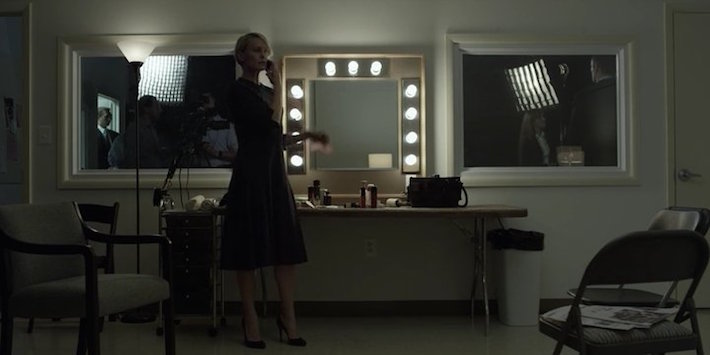 One Is the Loneliest Number

Claire and Frank have stepped outside of sexual monogamy before. Previous relationships turned to shit with Claire ruining the reputation of her ex-lover/ex-photographer, and Frank throwing Zoe into the business end of a subway car.

Meechum was their third (RIP) but more for Frank then anyone. A sexual release, protector, and confidant, Frank was allowed meaningful side action with Claire’s blessing. But with Meechum in the ground, and Frank unceremoniously grounded from flying more than once a week, F.U. is left at home.

But Freddy’s there! Oh Freddy, that affable servant type whom he fucked over just, you know a lil, by destroying his business, his name, and self worth; but then, you know, he gave him a job.  Frank’s super happy to invite Freddy over to have him cook him up a supper, and not so happy when Freddy tells him he’s leaving to go work as a florist.

Freddy claims to be an old dog that has learned some new tricks, one of which seems to be telling the President what’s really on his mind:

“You a motherfucker, Mr. President.” —Freddy “I Like Pretty Flowers Now” Hayes

More dogs are going to have to learn tricks, like Faustus, the adorable black lab who’s only sin is having owner Tom Hammerschmidt, who’s opted to start working with The Washington Herald to uncover the manipulation, deception, and corruption of the Underwood Dynasty. Poor Fausty, destined to spend hours at home waiting for Tom to return. What does a canine ponder in those long stretches of solitary confinement? “Am I really a good boy?”

Frank’s very, very bad dog Cathy Durant is currently muzzled for the time being, but who’s to say she won’t turn on a dime? She’s currently aiding his attack of ICO, the terrorist cell that everyone is using to his or her own political advantage with very little regard for human life or suffering. Because of his tummy troubles, Frank’s interested in “cutting off the serpent’s head” so he can look like a big, bad, strong man.

However, after all his Henny-Pennying about how the world will end, Will Conway isn’t going to let Frank take away his precious terrorists. Will puts all his power behind keeping the terror alive just until November, you know, so he can use it to ruffle the feathers of the masses to boost his election numbers. General Brockhart is so shocked he might fall into a cowpie, but like Conway tells him, he’s in politics now.

Never Have I Ever

Remy can’t seem to quit being a player in the political arena, meeting with Tom Hammerschmidt and irreverently crossing past “Do Not Trespass” signs and drinking his beer. But Remy is the key to unlocking the unlawful, if not impeachable acts of Frank Underwood—because Freddy sure as shit isn’t and Tom’s got the beating to confirm that. What Tom can confirm is that Remy had a super fun time in college and the game “Never Have I Ever” can still have its value in middle age.

“Underwood’s a crook, he’s not a killer.” —Tom “Oh Man, This Guy Has No Idea” Hammerschmidt

Speaking of killers, Doug goes on a date with the wife of the man he bumped off the donor list so the President could live. Nothing weird about that. Doug asks this poor woman to talk about her husband, even if she gets all choked up. Nope, not strange. He gives her flowers and looks at pictures of her and her dead hubby who he essentially murdered. This is a real turn around for Doug; it’s nice to see him in a healthy relationship.

Seriously, I don’t think there’s any sort of potential for absolute and complete catastrophe here.

Frank and Claire don’t bicker over something small like infidelity; they have a world to take over. Tom Yates was originally brought back into their fold because they wanted to keep his fictionalized account of their lives from being published before the election. More than that, Tom is one of the few who understands them. Claire is not used to be understood, and after making love a second time, she sends Tom away.

Frank’s like, “Aw, but you guys are such a great couple!” Frank’s matchmaking efforts prevail, and he knows that Claire will be careful as to not let the judgmental masses know that she has a mistress. After spooning with their clothes on Tom and Claire sit down to breakfast with Frank. In some circles, Tom is a “legitimate third” wherein he is recognized by all parties involved, and is able to have a meaningful part in their relationship.

And what have they become? A triangle—the strongest shape—of mutual love, support, and respect.

Sexy Consent – As if this episode wasn’t already slaying it with the progressive sexual thinking, when Tom kisses Claire and moves to have sex with her he gets her explicit permission. “Yes.” … “Yes.” … YASSS!

Also, did Tom get a makeover or something? He looks delicious in this season, more so than last, but maybe it’s the above scene that’s got my heart racing.

Hack Job – I was extremely disappointed there was no more weird hacker dancing in this episode. We got weird music instead. Like I get it, it’s jazz, they’re like playing between the notes or whatever, and I always feel like a total ignorant fuck whenever I don’t get it, but c’mon. Why do internet people think random sounds are music?