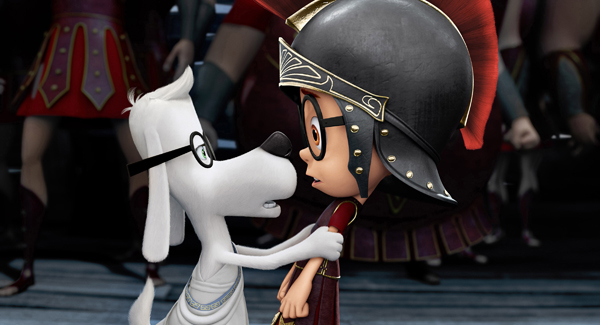 It took the better part of 60 years, but finally the work of master animator Jay Ward has a proper big screen adaptation in Rob Minkoff’s Mr. Peabody & Sherman. Well, I guess the first live action adaptation of George of the Jungle wasn’t all that bad (it hasn’t aged very well), but this is the first time since then that the spirit of Ward’s anachronistic and slyly witty work has ever translated to something cinematic. That’s mostly because the film stays faithful to the tone of the original show, delivers all new jokes, enhances the characters without destroying them, and by just updating the material enough so it doesn’t feel like a forced attempt at being hip.

Time travelling Nobel laureate, inventor, and all around most interesting dog in the world Mr. Peabody (voiced by a spot on Ty Burrell) and his adopted boy Sherman (Max Charles) spend most of their days going back in time to relive historical high and low points with the help of a WABAC machine that allows them to time travel. Their adventures are briefly put on hold so Sherman can attend his first day of school and get a more social based education than Peabody can provide. Picked on by a classmate named Penny (Ariel Winter) for knowing more than she does, Sherman gets into trouble and Peabody’s parenting is called into question. While trying to make a fancy dinner to smooth things over with Penny’s parents (Stephen Colbert and Leslie Mann) and stave off intervention from a skeptical and evil assistant principal (Allison Janney), Penny coaxes Sherman into taking her back in time in the WABAC possibly altering the course of history forever and for the worst.

Staring off with a pretty classical feeling vignette involving Peabody and Sherman trying to escape from the French Revolution, Minkoff blends the kind of silly, skewed, and nerdy history jokes and puns that made the original shorts from The Rocky and Bullwinkle Show so endearing with a renewed sense of energy. The repartee and wit that comes from Peabody and Sherman’s interactions with each other and everyone around them is really strong script courtesy of frequent TV writer Craig Wright. There aren’t any glaring pop culture references or elbow-to-the-ribs ironic jabs that suggest a film that’s in on the joke of being a remake, but instead the film functions as a natural continuation of something that already existed; a new and exciting adventure with old friends. About the only thing that really modernizes it is the film’s abundance of elaborate CGI set pieces, all of which look great and do their best to serve the story instead of simply providing mere colourful distractions.

Once the story kicks in, it goes back to the forgotten origins of Peabody and Sherman and the intriguing philosophical question about whether or not a dog can adopt a boy or vice versa, and takes it to a natural extension that was never fully explored before. Beneath all the silliness is the genuinely touching story of an orphaned father trying to raise an orphaned child on his own and how fears of abandonment and public perception can work both ways. It’s quite nuanced for something this lightweight.

It all goes kind of off the rails in the final third as history starts collapsing in on itself, threatening to destroy the whole world, but it doesn’t stop being entertaining. Aside from the strength of the story and the voice cast (which includes a ton of great cameos including the inspired casting of Mel Brooks as a frustrated Einstein trying to solve a Rubik’s Cube and Lake Bell’s Mona Lisa tormenting Stanley Tucci’s Leonardo Da Vinci) is that the film is laugh out loud hilarious in ways that appeal across wide age ranges. It’s similar to The Lego Movie in that the jokes aren’t always risqué or silly, but rather reliant on timeless gags that would be funny for kids and adults of any age. It certainly hits a hard to reach sweet spot, and that’s not bad for a new adventure from decades old characters. Jay Ward would be proud, and it gives this year’s previous high water mark for animated features a real run for its money.