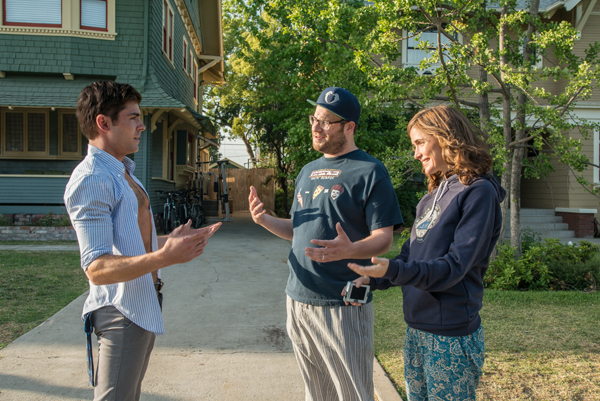 Nicholas Stoller’s Neighbors has all of the trappings of a crowd pleasing, bad taste classic in the making, but at least there’s no question that the filmmakers are laughing directly at their subjects rather than with them. In fact, even Stoller’s so called protagonists are purposely unlikable and remarkably unsympathetic, making for a rare comedy of manners where both sides err so horrendously that knowing members of the audience can take a deep breath and feel good that they aren’t like the people they see on screen. Those who see themselves in either of the film’s core familial dynamics, however, should seek immediate help and never be allowed to mix with people in public ever again. It’s class warfare where one hopes both sides will obliterate each other, and Stoller’s biggest success is in never pulling any punches or taking sides in the fight.

Mac and Kelly Radner (Seth Rogen and Rose Byrne) still haven’t begun to adjust to their new lives as parents to a newborn daughter. They think they’re still young enough to treat the kid almost like a plaything of sorts and that they might be able to squeeze out some irresponsible leisure time with their friends. By that same token, they become positively aghast when the Delta Psi Delta university fraternity moves in right next door, led by charming, unmotivated bro-type Teddy (Zac Efron) and the decidedly more down-to-earth and smarter Pete (Dave Franco). They try reasoning with their not all that younger charges to keep the noise down, often finding themselves enticed by the frat’s hard partying, no consequences lifestyle (the one they wish they were living instead of being parents) and taking a hard line of revenge against what they perceive to be a threat that the rest of their neighbourhood has turned a blind eye to. Mac and Kelly do everything in their power to sabotage the frat, but that only makes the brothers more determined and resourceful in their counterstrikes and problem solving skills.

Stoller finds himself working with a screenplay from first time feature scribes and frequent Judd Apatow film producers Andrew J. Cohen and Brendan O’Brien, but the results here are more of a scathing indictment of the manchild genre than Apatow himself would feel comfortable approaching in his own work. The script isn’t the film’s strongest point, often coming across as needlessly episodic and set-piece heavy, but Stoller has successfully found the meat of this slobs vs. slobs battle. In his best work (Get Him to the Greek, the first half of Forgetting Sarah Marshall), Stoller has been able to tap into his own cynicism towards humanity quite well. It’s why he’s a horrible choice to write something as pure and genteel as Muppets Most Wanted, and the perfect choice for something like Neighbors. Stoller knows that even on the page there is no way to make Mac and Kelly into saints worthy of being rooted for over these buffoons that they secretly idolize. From the opening sequence where a pair of grown adults think it would be a good idea to take their baby to a rave (a well staged scene where the parents try their best to sound responsible and rational) to the arrival of the frat and their appearance to initially be level headed youngsters, Stoller makes it known that the scales have all been set to zero and there’s only room for both parties to go further down in value and likability. It’s an important decision to note because none of the film’s humor works without such a decidedly bleak world view.

Despite the novel approach, Stoller still can’t get what he needs from the script on his own and he certainly isn’t what one would call a polished stylist (with the exception of some Gaspar Noe/John Hyams styled party scenes this film isn’t much to look at), so he relies quite heavily on a well rounded cast where the supporting players make more of an impact than the two high profile leads on the poster.

Rogen can essentially do the flustered, put upon straight-man routine in his sleep by now, but since he has such a decent handle on the material and because he has a director who isn’t afraid to get his hands dirty, he can tap into some of the nastiness and drive for self preservation at all costs that made his work in the underrated and misunderstood Observe and Report and Funny People so memorable.

Efron gets to do a variation of a role he’s done before – the charming All American pretty boy – but he’s allowed to bring a latent sociopathic bent to the role that he looks to be having a lot of fun with. His repeated line reading of the phrase “dicks in our hands” like he’s some kind of Nobel laureate is almost worth the price of admission alone.

But the film really belongs to Byrne and Franco who yank the rug out from anyone around them. Franco brings a certain degree of tenderness to his conflicted brother. He’s not as savvy or manipulative as Teddy, but he’s certainly growing up faster and putting what smarts he has to better use. The relationship that he creates with Efron is the most believable thing in such an outlandish premise. Girls come between them, academics come between them, they fight, they make up, they banter like best friends, and then they fight some more over something even stupider. It’s a great use of Franco’s well honed capacity for deadpan, and a good showcase that he can have range beyond simply being cast as a smartass in need of their comeuppance. In fact, Pete is the only remotely likeable guy in the film despite still doing his fair share of stupid things.

And while I know it’s bad form to start lobbying for people to be considered for potential awards down the road at any time of year, part of me hopes that Rose Byrne gets remembered somewhere down the stretch for her work here. Although she’s a frequent Stoller collaborator, she hasn’t been given the opportunity to shine that she’s been given here. As a surprisingly empowered, yet still somehow incredibly manipulative woman, Byrne proves that this film isn’t a complete sausage fest and walks away as the most memorable thing about the picture. Her chemistry with Rogen is effortless, and she’s actually able to come across as the funnier of the two in every scene they share (which can also be seen as a testament to Rogen’s abilities as an incredibly generous comedic presence). She can get as nasty and depraved as the narrative, and even as the subject of the film’s most outlandish and painful grossout gag (involving the most horrific nudity that has been seen in a comedy since There’s Something About Mary) she imbues the material with actual personality and wit instead of over the top mugging. It’s one of the best female comedic performances in quite some time, and the best performance in a film.

It should also be noted that the twins that trade off playing the Radner’s baby (Elise and Zoey Vargas) are some of the best infant actors I’ve ever seen. I’m sure a lot of it has to do with Stoller or their handlers, but whatever patience was put into those performances and reactions alone was completely worth the effort.

Neighbors still has quite a bit of bloat (none of the other frat members are remotely memorable or defined and a subplot involving two recently broken-up friends of Mac and Kelly adds nothing). The penultimate scene also sticks out like a sore thumb, and somewhat out of step with the rest of the rest of the film’s ideology, but Stoller keeps things moving fast enough so that nothing gets dragged down as a result. It certainly isn’t high art, but it’s not trying to be. It’s simply aiming to be better than these kinds of films normally are, and in those modest goals, Neighbors succeeds very admirably.