Papo & Yo Preview - That Shelf Skip to main content

It’s always a pleasure to see a game that has such an imaginative structure and design that we cannot help but smile as we play. Papo & Yo from Minority Media (@we_are_minority) is a puzzle-platformer that tasks the player with manipulating the environment in order to reach new areas and, in turn, progress through the level. On the surface the game might sound boring, but the ways in which the developers have created dynamic environments is so whimsically delightful that everyone who picks up the game should be grinning from ear to ear.

More surprising is a narrative that focuses on the difficulties of dealing with alcohol addiction. In Papo & Yo the player controls Quico: a young South American boy with an overactive imagination.

Quico must manipulate his environment in order to create platforms that he can jump across to reach new areas. In our demo the puzzles predominantly focused on moving small square buildings to create platforms. Quico interacts with these buildings through magical white levers, keys, gears, and… cardboard boxes?

Cardboard boxes (with windows and doors drawn on them) allow Quico to “pick up” buildings and move them. Basically a cardboard box, made-up to look like a house, is connected to a “real” building in the environment. Picking up the box makes a building float off the ground. Move Quico, and in turn the box, and the building will follow. Drop the box and the building drops in the new position the player has moved it to. Now combine all of these different interactive elements and there is the potential for a truly engrossing puzzle-platformer game.

Beyond manipulating buildings the player also has companions in the form of a small robot named Lula and a monster named… well, Monster. We did not get a chance to interact with Monster but we did play some with Lula. Lula gives Quico the ability to extend the length of his jumps and Quico can throw Lula to buttons throughout the environment to unlock doors and move platforms.

During PlayStation’s 2012 Spring Showcase we had a chance to talk with Charles-William Bibaud, Line Producer on Papo & Yo, about the development of the game, its unique narrative, and the challenges of trying to translate lived experiences into an interactive medium.

Dork Shelf: Can you tell us a little about Minority Media, such as any particular goals you have as a developer?

Charles-William Bibaud: Minority was founded a little bit more than a year ago by a small group of relatively experienced game developers that decided to go and found an independent studio to be able to provide some more, I would say, different original content that you’re maybe not used to seeing that often coming out from big companies.

DS: How long has Papo & Yo been in development?

CWB: It’s been in development almost a year now.

DS: Could you talk about how working with Sony’s Pub Fund changed the development process on the game?

CWB: It’s a great initiative and a great help. We are in Canada so we have a bit of support from the Canadian government as well, through the Canada Media Fund. So this also helps independent developers to create great content. But Sony also supports the developer financially, and on a promotion level, which is a great help to us because sometimes independent developers have great ideas and original content to bring, however they do not have the financial means to bring that great content and product to market. So Sony’s support is great.

DS: What can you tell us about the origin of the narrative in Papo & Yo?

CWB: It’s inspired from a true story from our creative director, Vander Caballero, who is also one of the founders of the company. He was a small, poor kid in South America dealing with a tough relationship with his father, who was addicted to alcohol. So it wasn’t always easy. He wanted to tell his own story through a game.

DS: Was there any particular difficulties in trying to translate a true story into the creative medium of video games?

CWB: Yes. Absolutely. That was one of our main challenges because we not only wanted to provide a great gameplay experience but on top of that we wanted to make sure we can tell a relatively deep and intense story through this game. It’s a different medium than film, of course, so it’s mostly told through interactivity but also some cinematic sequences that help you to understand a bit more. 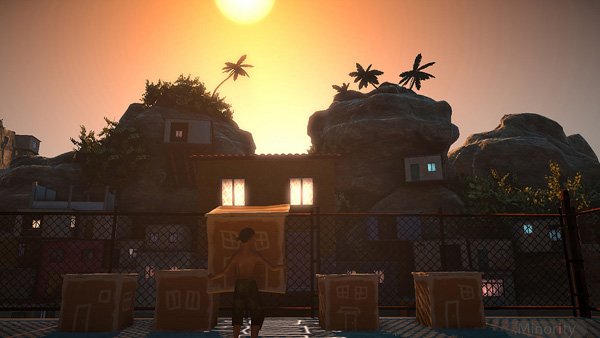 DS: The game takes place in South America, could you explain how the locales you’ve used in the game influence the puzzles or vice-versa?

CWB: Obviously it influenced the look of the game because South America is super colourful, even though those places are sometimes in poorer regions. There are plenty of small houses to interact with via magical elements through the game. So it [South America] provided a great environment to do super interesting stuff. It is inspired from there but there is also the use of the imagination, which allows us to be more creative and free in terms of gameplay and interactive elements.

DS: We’ve seen predominantly urban environments so far. Does the game take place in any other environments?

CWB: I don’t want to reveal too much of the game because I think the best experience is when you discover it. You begin in a place that is a relatively realistic looking with a touch of imagination. However, you will move to a different type of environment in terms of realistic environments like jungle, with more plants, but also in terms of the imagination side of it. Sometimes you progress through the main character’s own emotions. So some levels will be darker some others will be more abstract because just like when you are dreaming your dream is not always as focused. So you’re going to see some really funky stuff.

DS: Is the narrative in the game predominantly linear or are there chances for branching paths?

CWB: The narrative is predominantly linear because we really wanted to tell the story and it is a relatively complicated story to tell through the game. However, the relationship you’re building with the characters is purely interactive. You’re going to build your relationship with Monster and with Lula, the little robot, and as you play with them you will develop a real attachment to those characters. And they will help you to solve puzzles and progress through the game. So there is interactivity in the actual character development.

DS: We’ve seen some of the interaction with the characters but can you tell us, without giving too much away, how those character interactions influence the gameplay and puzzles?

CWB: Yes. When you meet the new character Lula, he will provide you with some special abilities. You will also be able to trigger some special magic elements that Quico maybe would not be able to do by himself.

Same thing with Monster. He has the downside of going into a frenzy if he eats frogs. So that creates another dynamic  – he is your friend and you love him but if he turns into a rage because he’s eaten a frog he’s going to be uncontrollable. So now you have to solve the puzzle with Monster being frustrated. Sometimes he is also calm so he is going to also have his own specific things that only he can do to help you go through some of the different puzzles.

DS: We noticed in the demo we played that there was a brief interactive cutscene. Could you explain how important interactivity is to each element of the game?

CWB: We thought that most of the emotions you feel from the game should happen through the game mechanics. When you actually live the story it’s even stronger than just watching it. So we wanted to provide as much of the story, and you’re experiences you are actually living, in an interactive form. So that’s why we tried to put as much as possible into the interactivity. Of course we can’t do it with all of it because sometimes there are things that need to be told more cinematically.

DS: Thanks for your time and we are looking forward to the completed game.