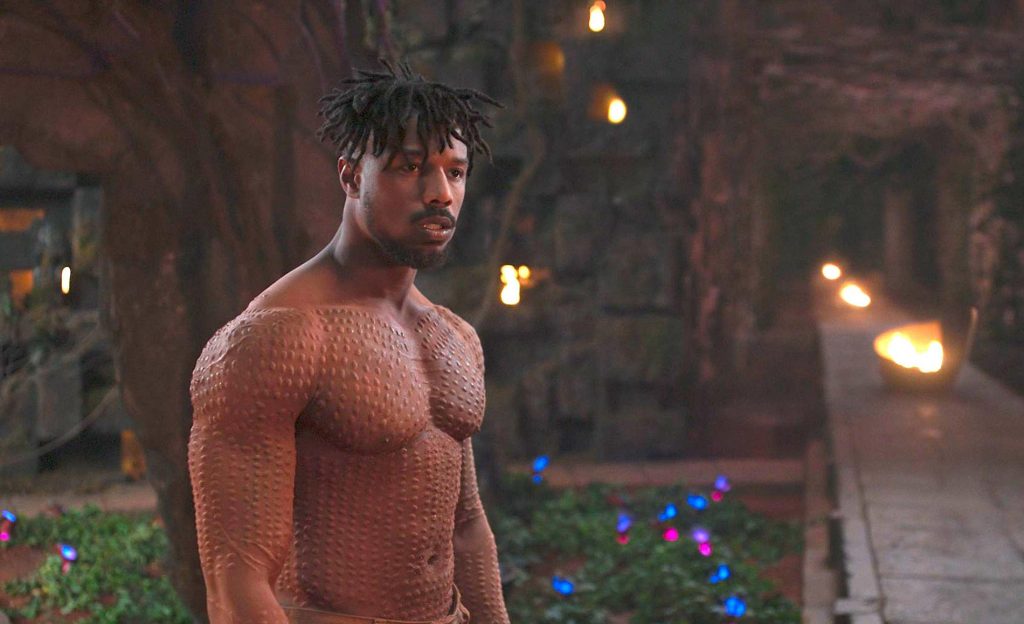 I remember feeling anticipation for this film the minute Ryan Coogler was attached to direct, and excitement building as the cast was announced. I also vividly remember seeing it in the theatre on opening weekend, watching eager moviegoers line up to take selfies with the standee, many dressed in (what I, an ignorant white lady, presume to be) vibrant traditional African robes. I’m happy to say, while that opening-weekend elation can’t be replicated, the experience of rewatching this completely holds up.

Generations ago, the five tribes that make up the African nation of Wakanda were at war over access to vibranium, a rare metal whose sole source is an ancient meteorite, now the heart of Wakanda. One warrior among them had a vision given to him by the panther goddess Bast; he ingested a heart-shaped herb affected by the vibranium in the earth, and gained superhuman powers. All the other tribes except one, the Jabari, agreed to unite under his leadership, and he became the Black Panther — the legendary guardian of Wakanda.

In the present day, we pick up where the events of Captain America: Civil War left off: following the death of his father T’Chaka, T’Challa (Chadwick Boseman), the new Black Panther, is home for his coronation. In the ceremony, T’Challa is challenged to ritual combat by M’Baku (Winston Duke), the leader of the Jabari tribe. T’Challa defeats him, and is celebrated as the new king of Wakanda.

Meanwhile, Ulysses Klaue (Andy Serkis), whom you might remember from Avengers: Age of Ultron, steals a vibranium artefact from a British museum in order to sell it to CIA agent Everett Ross (Martin Freeman). Learning of the deal, T’Challa, Dora Milaje leader Okoye (Danai Gurira), and his ex Nakia (Lupita Nyong’o) travel to Busan, South Korea to intercept the deal, vowing to bring Klaue back to Wakanda to face justice for his crimes against the nation. What they don’t realize is that one of Klaue’s accomplices, Erik Killmonger (Michael B. Jordan), has other motives: he has a claim to the throne of Wakanda, and his challenge to T’Challa throws everything into turmoil, leading to the epic final battle scene.

Obviously I am vastly simplifying the plot for brevity here, but in summary, it’s the conflict between Killmonger and T’Challa that really sets the story in motion. Aside from the questionable wisdom of having your system of political power rest upon one’s ability to fight in hand-to-hand close combat, the great thing about this story is that Killmonger isn’t completely wrong. His methods are criminal, to be sure, but ultimately he wants Wakanda to be a force for good. His final speech in this movie still gives me chills.

But the story is just one facet of this film. It’s visually stunning, with an award-winning Afro-futuristic production design and costume design, offering us a vision of Wakanda that conjures what Africa might have been if it weren’t plundered and pillaged by colonization. Also, and not to footnote this, but it’s so wonderful to see a movie with a black director and predominantly black cast receive accolades and achieve box office success, breaking records left and right.  To be sure, Black Panther is a very, very good Marvel superhero movie; but this is more than a movie, it’s a cultural moment.

So, should you watch it with your kids? What, you mean you haven’t already?? Ok, you know what you have to do: drop everything and fire up Netflix tonight, and revel in this amazing, enthralling movie.

Bottom line: Absolutely unmissable and deserving of every single accolade.