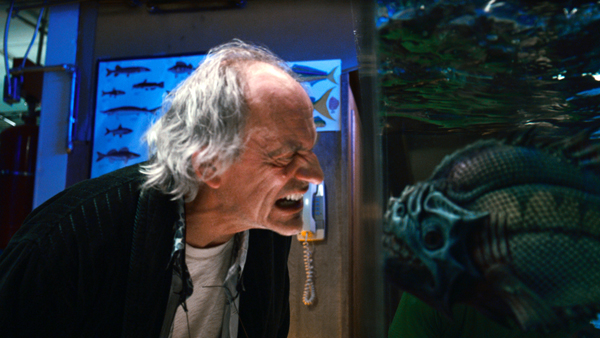 Even when filmmakers intentionally go out to make a campy or off-beat (or bad) film, tone is key. Joe Dante (the director of 1978 Roger Corman produced original Piranha), James Cameron (the somewhat in-name-only director of the even more cut rate 1981 sequel to the original), and Alexandre Aja (director of the ridiculously fun 2010 remake) all understood this perfectly. Feast director John Gulager sadly doesn’t. His sequel, the cheekily titled, but curiously blunted Piranha 3DD has no tone whatsoever. It’s aimless beyond words, managing to botch the horror, comedy, and pointless T&A that the other three films to be spawned from the man eating fish premise got right. It’s barely even a movie and what ultimately makes it to the screen is so dire and boring that everyone involved should actually be ashamed of how badly it’s all phoned in.

The action transplants here from Lake Victoria on spring break to Cross Lake, Arizona where a lecherous ne’re-do-well (David Koechner) and his goody-two-shoes step daughter home from grad school (Danielle Panabaker) are majority and minority owners, respectively, in an inherited water park that stepfather wants to turn into a boobs and brews filled wonderland while cutting corners at every turn to save on cash. One of his cost cutting measures – an illegal well that cuts out the need for depending on the city for water pumping services – taps directly into Lake Victoria, and the sulphur smell from the chlorinated pools sends the dangerous fish into an all new feeding frenzy.

Only there is no frenzy since everything here is simply cobbled together from unfitting parts devoid of any humour or suspense. The 3-D is wonky, the soundtrack sounds like it’s pulled entirely from the special “ska remainder bin” that’s gone untouched since 1996, and every actor looks like they would rather be bouncing a tennis ball against a wall rather than being on screen here. The boredom hangs like a pall over the entire production.

Not even cameos from well known wash-outs like Gary Busey (taking on the same sort of Richard Dreyfuss role from the previous intallment) and David Hasselhoff or returning actors from the first film (Christopher Lloyd, Ving Rhames) can add to the fun. All four of them have nothing exciting or funny to do. Well, Rhames and Hasslehoff have things to do that might seem funny on paper, but are totally botched in execution because Gulager has absolutely no clue what to do with any of them.

The film also makes the grave mistake of turning this into a straight-up teens in peril flick since no adult would seemingly want any part of this (aside from the always game Koechner). The cast does what they can, but aside from Panabaker and 30 Rock’s Katrina Bowden, absolutely none of them can act worth a damn, which if you are trying to make a campy-horror comedy is actually the wrong way to go about casting your film. You want people who are IN on the joke, not people who ARE the joke. This film doesn’t have actors like Adam Scott and Elizabeth Shue from the previous instalment to fall back on. The main cast has literally nothing going for it here.

As for the gore, this film manages to screw that up, too. The most risqué sequence in the film again looks good on paper, but Gulager just can’t seem to get the rhythm of it right, turning it into a shock shot with a weak payoff. Thankfully it involves Bowden, who sells it like a true pro and salvages the smallest bit of fun to be had in the film. Even the supposed Grand Guignol styled finale manages to be dishwater dull, devoid of any memorable scares, dismemberments, or gory kills that make people want to watch these kinds of movies in the first place. It becomes so monotonous and by the numbers – racing to get to the ending in a bafflingly short 74 minutes before the credits hit – that I literally began counting the seconds until the film ended.

Although the truncated running time and constantly shifting release date of the film gives me some room for pause when knocking the gore effects since the film moves and looks like a whole lot of footage was excised on the cutting room floor, even in mundane dialog sequences. Nothing really pieces together, but maybe, as is so often the case with such films, there was a great deal of interference on this front for various reasons that I’m not entirely sure I care to know.

Early on in the film when asked what a character thinks of the park she remarks that she thinks it’s a really expensive joke. If that had been in the 2010 film, that would have been a knowing metatextual line that would have summed things up brilliantly. Here, it’s an outright lie. This film is a short, and cheap joke that tries desperately to recapture the original. It’s like hearing a joke that you already know and liked being retold to you by someone that’s incredibly drunk who can’t quite remember it all and keeps getting distracted before coming to the punchline you knew was coming from the start. Just like being in the presence of said drunk, you don’t necessarily want to leave because you liked the joke the last time, but you can’t help feel like your time was just wasted and you keep checking your watch waiting for it to end.