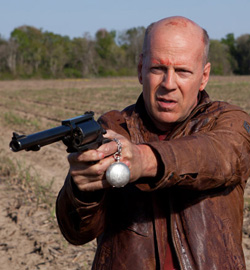 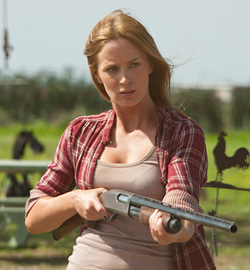 We talk to Looper actress Emily Blunt about working within the action genre, the vision of director Rian Johnson, working with kids and accents, and her own thoughts on time travel.

Enter to win a pair of tickets to an advance screening of TIFF's 2012 opening night film Looper exclusively in Ottawa, Halifax, and Winnipeg on Wednesday, September 26th from Dork Shelf and Alliance Films. Five lucky winners in each city will also receive a special edition Looper pocket watch! 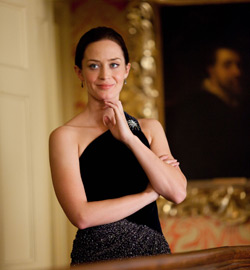 Salmon Fishing In The Yemen slides into screens this week with one of the most uninspiring titles for a major release in years, but at least this movie does exactly what it says on the box. Admittedly, there are a handful of sweet and funny little moments as well as some nice performances from, but the film is ultimately about, well, salmon fishing in Yemen. It's not exactly riveting subject matter. Sure assassinations, wartime tragedy, liberal doses of verbal sparring, and some gentle romance are woven in, but ultimately the movie is about the magical healing powers of fishing.
I’m not a fan of horror films at all, but after seeing this trailer I definitely plan to check out director Joe Johnston‘s (Hidalgo) remake of The Wolf Man. The film stars one of my all time favorite actors: Benicio Del Toro.  His performances are a rare commodity these days with so much crap out […]