With the exception of Mad Max: Fury Road and the devastating Magic: the Gathering card, I’ve rarely had much interest in any kind of wasteland. That’s one of the primary reasons I’ve never played a Fallout game until I spent a few hours live-streaming the original over the weekend. Everything I know about the franchise is pulled from the coverage and marketing campaigns for Fallouts 3 through 4, so suffice it to say that the Interplay original was not what I expected.

Unlike more recent Fallout games that adopt a more fluid first person control scheme, Fallout 1 is a far more traditional RPG. The turn-based systems borrow noticeably from tabletop RPGs like Dungeons & Dragons, offering a top-down grid in which math problems are dressed up as characters, monsters, and items and in which all of the combat is handled via probability. Fallout 1 is a numbers game, and you’ll succeed as long as your numbers remain larger than those of the Rad Scorpions you’re fighting. 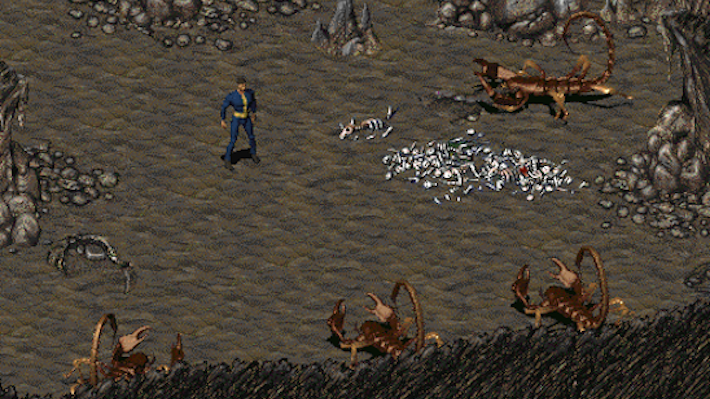 It’s not my first time wading through such a system, but even I found Fallout to be a little overwhelming. The game isn’t any more or less complicated than comparable RPGs, offering roughly the same number of attributes and skills to customize your character. But there aren’t enough signposts to help you navigate those statistics, which is why I find that I’m less than thrilled with the original.

Despite the post-apocalyptic trappings, Fallout is unmistakably an RPG. It has character classes and archetypes. There are builds that lend themselves to certain styles of play. The game just doesn’t tell you what they are. Unless you’re already familiar with the game’s internal language – that is, unless you’ve played previous Fallout games or spent hours researching options – there’s no way to know what skills you need to invest in at level one in order to play the style you want at level twenty. The relationship between stats and outcomes is obscured, which forces you to consider every single option before making a decision.

And yes, I’m aware that previous Fallout games didn’t exist at the time of Fallout 1. That’s also kind of my point.

Since Fallout offers dozens of options and hundreds of different combinations, it can be difficult to sort through all of that information. Should I invest in small guns or large guns? Will I do more damage with guns if my character is stronger? How important will science be later in the game? Will I run into a lot of items that I’ll be able to fix? Those are only a fraction of the choices that Fallout throws at you before you’ve even entered the vault, and it’s simply impossible to know how your choices will impact your character once you finally start playing.

The lack of focus made me appreciate the necessity of character classes in RPGs. Dungeons & Dragons is the best example, but everything from World of Warcraft to Shadowrun incorporates some kind of clearly delineated character structure. There are Wizards, Warriors, Druids, Priests, and other assorted types of characters, and while those classes add flavor, they also serve an important mechanical function. Classes are a way to process information and to guide players down paths that lead to optimal results. A wizard is going to cast spells. A rogue is going to be sneaky and stealthy. A warrior is going absorb damage and hit things with a sword. We know that before playing the game, and the game directs our attention to specific traits that will help us play the best version of a given character.

Fallout eschews that clarity, and I don’t know if it’s an oversight or a deliberate attempt to create a certain kind of experience. The game wants to give you the freedom to interact with the world in a limitless number of ways and in that regard it’s successful. There are many equally valid approaches to any scenario and I haven’t even scratched the surface of what the game allows. The lack of definition definitely seems like it would be in keeping with that theme.

I still think the introduction feels like a mistake. Offering a basic roadmap at the beginning does not negate complexity further down the line once players are more familiar with the systems and are able to make better-informed decisions. After all, there can be many different kinds of wizards, and more traditional RPGs manage to offer plenty of flexibility. Character trees allow games to introduce new information at gradual (and more manageable) drip, whereas Fallout overloads you with a deluge of information in which you have to decipher everything at once.

That might not be such a big problem if not for the conventions of the genre. I’ve played enough RPGs to know that you usually have to focus on a limited number of attributes in order to get the best perks near the end of game. If you make the wrong decisions in the beginning, there may not be an opportunity to fix them later and the result will be dissatisfying.

With Fallout, my fear is that I’m going to build a character only to discover halfway through the game that I have none of the skills needed to complete the challenges I’ll face or – what’s worse – that I won’t be able to play the character I was trying to play because I’ll have unknowingly invested in the wrong statistics. That may not be the case, but I have no way of knowing that when I first sit down to play. I become paralyzed trying to figure out if I’ve just made a terminal mistake that won’t make itself known for another 40 hours.

Of course, I’ve only played three hours of Fallout, and it’s possible (perhaps likely, given the reputation) that the later content makes up for those early stumbles. From what I’ve seen, the game is good about presenting you with multiple solutions and it seems unlikely that I’ll ever reach a situation in which there’s simply no way for me to progress. Chances are I’ll always have some trick that will prove useful.

However, that doesn’t change the fact that the game does not make a good first impression. It’s too much too soon, and it makes it difficult to enjoy those initial hours when you’re spending more time trying to figure out what everything does that you’re spending in the game.