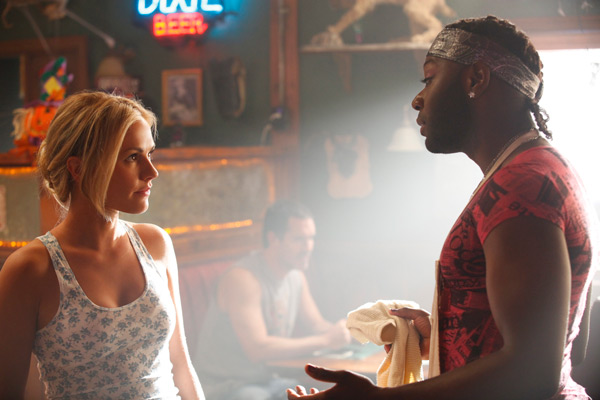 True Blood is the kind of show that when mentioned, can either elicit squeals or groans. Despite my love of it, it’s the kind of show I often find myself making excuses for. “I’m not really into the whole vampire thing, but at least these ones don’t sparkle.” or “It’s campy, but at least it knows it” or “I’m just a fan of Alan Ball / Alexander Skarsgard / southern accents.” Although it’s an incredibly entertaining hour of TV, you’ve got to admit it’s not always the most consistent or well-constructed show. With each passing season I find myself thinking: “Really, Alan Ball? Werewolves? What’s next…. oh, witches? Come on n- FAIRIES?!” I’m pretty sure that eventually he’s going to run out of mythical creatures and we’ll find out that Andy Bellefleur is actually a leprechaun. However after being blown away by last night’s season four premiere I’ve decided to never again be ashamed of my love of True Blood. Your favourite gap-toothed, fang-banging waitress is back and already it’s shaping up to be a bad-ass season, fairies and all.

As usual True Blood picks up where the last season left off; Sookie has just discovered that she’s half ‘fey’ and has entered the world of the fairies. All that pink sparkliness almost made me give up (she has a fairy godmother? Barf) but it  soon took a delightful turn when the fairy queen’s face rotted off and she turned into an awesomely evil harpy using enough CGI to make Peter Jackson jealous. Between that and Lafayette’s new coven leader, I’ve got enough nightmare fuel to last me a while. It simultaneously delighted and bothered me how the show always begins right where it previously ended. I admire the commitment — which works fine on an episodic basis and it’s nice to feel like you didn’t miss anything — but it doesn’t leave much room for growth or change between seasons. So kudos to Alan Ball for getting around that: minutes in fairy land are actually months in the real world and Sookie has been missing for over a year. Now Jason is a cop, Tara is batting for the other team and Bill is … a douchebag.

I’ve always been a Bill and Sookie purist who didn’t want to see her with anyone else (Eric is hot but an asshole and don’t get me started on the werewolf guy). Yet I’m kind of digging this politicking, slut-banging Vampire King Bill. At least it’s not going to be another season of him mooning around rescuing his girlfriend while sexily growling ‘Ohhhh Sookie’ all the time. Bill’s new attitude together with Eric’s new landlord status and close proximity to Sookie may be just the right conditions for him to successfully swoop in. At the very least we will probably see him with his shirt off more, which you probably didn’t think was possible.

Already this season I’m more interested in the secondary character plots than usual and everyone’s got a story. Lafayette joins a coven and realizes that it’s tough to avoid all this ‘magic shit’ when it’s inside you. Arlene is convinced that her precious baby boy is in fact an evil demon. Jason is still baby-sitting his meth-head girlfriend’s hillbilly family but the ingrates start to turn on him and Jessica and sweet ol’ Hoyt are realizing that vampire-human relationships aren’t exactly a cake-walk. Or any kind of food-related walk. Come on, how hard would it be for Jessica to order him a pizza once in a while? The only plot I’m not totally buying is Sam’s weird shapeshifter supper club. Although I suppose it’s nice that he has friends to play ponies with.

What started out as a typical tweeny tale of love-sick vampires has transformed into a dark, southern gothic saga featuring drug-addicted hillbillies, amateur necromancers and lesbian mixed martial artists. Basically everything you need for a good hour of television. To borrow a phrase from Lafayette, “I’ll stay five minutes. Ten if they got dranks.”  Actually I say that before pretty much anything. Well this season on True Blood they’ve got dranks galore so I’ll definitely be sticking around.