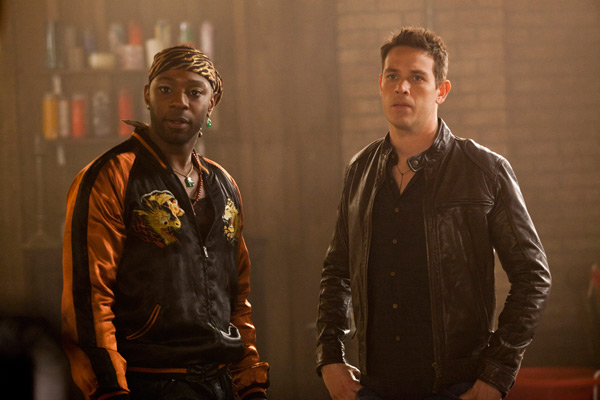 Just the other day I was contemplating the current television landscape when it occurred to me that — save for Game of Thrones — there just isn’t enough incest on cable. Looks like Alan Ball agrees because family lovin’ seems to be the theme of the latest episode of True Blood called ‘I’m Alive and On Fire’.

Following possibly the longest ‘previously on’ recap segment ever we see the aftermath of Eric’s fairy feast. After snacking on Sookie’s fairy godmother Claudine, he’s hungry for more; but even in a drunken haze his affection for Sookie outweighs his thirst and he vows not to harm her. However he never promised he wouldn’t drunkenly hit on her or run away despite the fast approaching dawn.

Bill tries to bully Pam into telling him Eric’s whereabouts but she won’t spill despite warnings of treason. Pam calls King Bill out on being a royal pain in the ass but it’s in one ear and out the other. His comeuppance does come however when Nan Flannigan freaks out about how he deployed Eric to attack a bunch of hairy, Patchouli-wearing Wiccans. Bill voices his concerns over the coven’s recent activity but Nan blows it off. “Remember Salem?… Just a bunch of Puritanettes who needed a good lay.” She warns him to clean up his mess without any human casualties and warns him not to screw things up because “How many retired kings do you know?”

Meanwhile poor old Jason is getting his brains banged out by Crystal and her hillbilly sisters (“Breed, Ghost Daddy, breed!”), but he’s fading fast and worried for his own health. Horrified when Crystal’s pre-teen sister (Or cousin? Aunt? When dealing with a family who uses the term ‘brother husband’ it could be all of the above) is sent in to have a go, Jason convinces her that maybe a rape situation isn’t really an ideal time to cash in your V-card and instead she sets him free.

Sookie enlists the help of the werewolf Alcide to help her find Eric before the fairy blood wears off and his skin starts to burn in the sun. They find Eric still high as a kite and having a wonderful time soaking up the sun and wrestling’ gators. His hackles go up when Alcide makes his presence known but the confrontation is short-lived as the sunlight starts to affect Eric and they must quickly take him home. Alcide isn’t happy about Eric living with Sookie but she compares it to his living with the reformed albeit crazy Debbie. Touché. Alcide and Sookie share a moment but he still goes home and bangs Debbie. Darn.

Bill and his new lady friend Portia take their fling to the next level when he meets her Grandma Bellefleur (Mona from Who’s the Boss! And damn, she looks good). Things start out smoothly and Bill charms the pants off everyone but it soon takes a weird turn when they review the Bellefleur lineage and discover that Bill and has been banging his great great great granddaughter. Gross! Don’t you hate it when that happens?

Felton goes nuts when he discovers that Jason is missing and tracks him down but Jason’s ready for a fight and kills Felton much to Crystal’s delight. Now she’s the ‘Big Mama Kitty’ (hey, that’s my nickname!) and she and Jason can be together. Luckily, Jason has finally come to his senses and he tells Crystal where to stick it but she cheerfully and ominously tells him that he’ll be back at the next full moon. An exhausted Jason collapses in the road and is found by Hoyt and Jessica who heals him with some of her blood.

Tommy takes off to visit his mother who claims to have left his abusive father because he made her participate in dog fights again. The two bond over their mutual disdain for Sam and Tommy’s newfound reading’ skeeyils but things quickly take a turn for the worse when Tommy’s old man appears and takes him hostage. Not sure where that’s going, but I really hope it doesn’t involve more incest because between this show and Game of Thrones I’m kind of maxed out in that department.

You know that a show has too many subplots when a storyline doesn’t even start until 40 minutes in to the episode. Terry leaves demon baby Mikey alone for a moment and returns to find the words ‘Baby not yours’ scribbled on the wall and a marker in Mikey’s hand. Subtle, Mr. Ball. Very subtle.

Finally everyone’s favourite demon-vessel Marnie is plagued by dreams of burning witches and pleas from Lafayette, Jesus and Tara to reverse the spell so as to avoid the wrath of Pam. After a little spiritual guidance they come across a reversal spell but when Pam pisses off the spirit, Marnie/the demon witch decide to turn Pam into a face-melting zombie instead. Totally. Rad.

Whew! Got all that? Yikes, this show is getting complicated. Next week, will Marnie’s spell kill Pam? Will Eric finally put on a shirt? Will Bill Compton bang another relative? Ick….. Let’s hope not.