True Detective plays well with time. It seems like a necessity for a complete story spanning only eight episodes total, but it is still surprising with how much faith writer and creator Nic Pizzolatto is putting in viewers to keep up with the multiple narrative lines. Episode five takes this idea of temporal play and turns it into yet another aspect of horror that the show’s been so adept at delivering, delving into existential time-space contemplations and having its characters relive the nightmares contained in their lives.

“The Secret Fate of All Life” starts with Rust (Matthew McConaughey) and his Iron Crusader hostage Ginger dealing with a powerful man. He is large, confident, doesn’t care about money and says things like, “I can see your soul at the edges of your eyes,” and “There’s a shadow on you, son.”

This is the cooking partner of Reggie Ledoux, the man who our true detectives believe (at least in 1995) to be the murderer of Dora Kelly Lange, and he does not want to see Rust again.

When the potential of a meeting with Ledoux falls through, Rust binds Ginger in duct tape, throws him in a ditch, and meets up with Marty (Woody Harrelson, wearing a Pink Floyd Division Bell t-shirt tucked into his jeans) outside of where the magic happens: the dilapidated meth compound we saw teased at the end of episode three before seeing a gas-masked man in nothing but white briefs wielding a machete before shit was about to go down Vietnam-style. 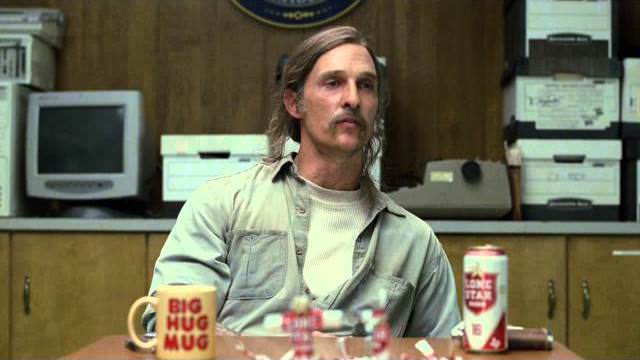 But we know now that this is the untold story. At least what we see. The interrogation narrating the story in 2012 describes a firefight, cutting between both Rust and Marty’s testimony to detectives Gilbough and Papania, complete with an onomatopoeic “BOOM!” What we see is tensely void of violence though, and as the bullets fly verbally, the off-book detectives investigate hell’s meth kitchen.

Marty is the one who finds Ledoux, covered in tattoos (including a pentagram on his back below the scar of what used to be the Yellow King’s sign, and an octopus shaped like a swastika on his shoulder) and rambling about black stars. Rust has him in the field outside, handcuffed, as Marty continues to search.

The big guy emerges out of a shed where he was dealing with chemicals and is held up by Rust while Ledoux makes good on his appearance and begins to rave, claiming he’s seen what happens next, and that he saw Rust in his dream. “You’re in Carcosa now, with me. He sees you. You’ll do this again. Time is a flat circle.”

Marty emerges to quickly blow off the LSD-meth-shaman’s rambling head off at point blank range. Ledoux’s partner makes it maybe twenty feet before detonating a boobytrap and in turn his body.

That’s it. Ledoux and his partner are dead. The case is over. This is episode five of eight. True Detective is able to pull this kind of surprising trickery with expectations of pacing because it’s telling a story that hasn’t been told on television before. It’s exciting to see a show so expertly written deceive you in the same way it deceives its characters. As soon as you think you know True Detective it reveals another dimension and you’re free falling all over again down a rabbit hole of cult symbols, literary references, nested narratives, shifting stakes, and sympathetic monsters.

Marty and Rust rescue the bodies of two children. They were the spark that made Marty’s rage explode through his gun into Ledoux’s skull: a boy and girl shackled and lying on a many-times-over soiled mattress in the shanty drug compound. The boy was dead, the girl was catatonic and the detectives were made heroes, rigging the crime scene and coming up with a story so tight that even after 17 years the two of them tell it the same water-proof way.

The 1995 storyline ends. Marty even gets a second chance with Maggie and his kids. Rust is set up with a doctor girlfriend named Laurie.

Then we land in a new time. In 2012 Marty starts to talk about how things fall apart for him again. His girls are playing in the front yard in slow motion in a way usually reserved in television to foreshadow a death by car collision, but time passes and 2002 arrives. His youngest is a cheerleader, his eldest a gothy trouble-monger. Marty cites the detective’s curse: They were right there under his nose the whole time, but he paid no attention.

The regret in his monologue is anchored quickly when we see his familiar rage beast jut out of his chin in that signature Harrelson angry underbite. He picked up Audry from a statutory rape situation with two boys (“Tell it to your mother”).

Then we hear the familiar implications of violence. The offenders are spending the night in jail. Maybe he’ll lay statutory rape charges on them, maybe he’ll do whatever he wants to them. And right when you think maybe this is going to be a open and shut case for the parents, Marty smacks Audrey across the face.

In 2012, Rust is making more beer-can-people as he educates Gilbough and Papania on the more emotionally relatable aspects of M-Brane theory. It is clear that some of what Ledoux had to say haunted him for a lot longer than the short time we saw him with an intact skull. He even quotes the madman, before expanding on his idea of a static dimension of time, “To us it’s a sphere, to them it’s a circle.”

The Gilbough and Papania don’t want philosophy though, so they cut to the chase: What happened in 2002?

Well, that seems to be a heavy question. Rust is demonstrating his cathartic interrogation technique, getting some poor sucker to cop to a double murder when sticking up a pharmacy, but just as it seems that the taxman is just as calm and cool as ever, now that Crash has been buried for years, the killer offers up information on the Dora Lange case.

One mention of the Yellow King and Rust snaps, hitting the perp and invalidating the confession.

Where last week we saw the horror of what lies inside – a horror of unknown potential – this week we see a new flavour. The existential horror of having to live through the same terrible events on the flat circle of time that Ledoux described, reincarnated as himself without the prior knowledge of having lived this life. Doomed to make the same mistakes and behold the same atrocities; To rescue the same children, tell the same stories and to fail to catch the right bad guy. Countless Marties hitting their daughters in the face instead of being a father, going on and on beyond time.

It’s the secret fate of all life. Marty is brought in on the reopened case just as the pharmacy killer has slit his wrists, moving his proverbial cart back to the beginning on a ride that will bring him to the same place: a jailhouse suicide after receiving a phone call from what was probably not his lawyer.

This prompts Rust to follow the call log out to a phone booth in the middle of nowhere and it’s this part of the story that gets the Marty of 2012 to ask the big question: why are these new guys all over Rust?

Well, they don’t think his shit adds up. They have pictures of him returning to a crime scene where he was spotted with this truck five times by five different witnesses over the past month. They want the key to his storage unit. He won’t give it up. If they want to arrest him, fine. If they want to follow him, fine. But if they want to see things, they’re going to need a warrant. Rust is out. Interview over, thanks for the beer.

The implication is that Rust is the suspect. Maybe Rust made the phone call to the dead guy in the cell.

This, the first of the 2012 interview conclusions, is interspersed with Rust on a solo journey. After returning to the original scene of Dora’s humiliation and finding a wreath of sticks around a dark void, he follows a hunch and ends up in an abandoned school (the same one briefly visited in an early episode). The setting would be creepy enough, but inside he finds etchings of red eyed cherubs on the wall and those tiny stick triangle-traps that were at all of the Yellow King crime scenes.

Marty concedes in 2012 that the detectives aren’t necessarily wrong to be suspicious of Rust, but warns them that if they didn’t get a read on him, he certainly got a read on them. Gilbough and Papania want him to walk them through the story up until an “altercation” that supposedly happened in 2002 before Rust went off the grid, re-emerging in 2010.

The final shot of the episode takes place in the ghost school. Rust holds up one of the stick crafts – illuminating it in an angelic beam of dusty light – as the camera pulls back though a broken window that frames him in a mural of painted trees. It’s as if he’s been walking through a dream, trying to remember the details that haven’t happened yet. It’s like he’s said before and will say again, over and over ad infinitum:

“You can’t remember your lives. You can’t change your lives. And that is the terrible and secret fate of all life. You’re trapped in a nightmare you keep waking up into.”