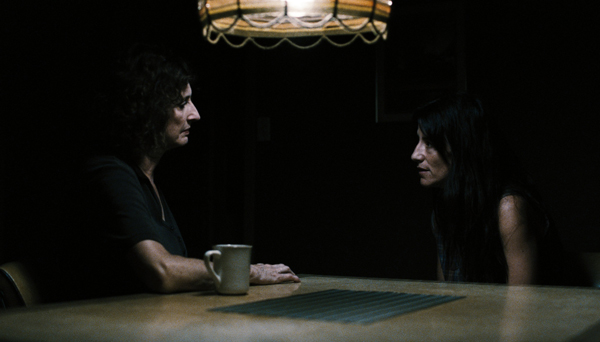 Although perhaps a bit more straightforward than a lot of his previous work, Vic + Flo ont vu un ours is very much a film from Quebecois auteur Denis Cote. Tonally all over the place – often vacillating between humour, pathos, and suspense – and bearing rich characters and a hyper-realistic sense of emotion and setting, it keeps viewers on their toes while constantly making them wonder where it’s going to go next.

61 years old and recently released from prision, Victoria (Pierrette Robitaille) has returned to the long dormant sugar shack that’s remained in her family. Her brother (Guy Thauvette) seemingly wants nothing to do with Vic or the land, and she’s tasked with looking after her paralyzed and speechless uncle (Georges Molnar). Her lover and former cellmate Florence (Romane Bohringer) comes to live with her, and is technically only allowed to do so by the kindness of Vic’s sympathetic parole officer, Guillaume (Marc-Andre Grondin), since neither is technically allowed to be associating with people possessing criminal records. Vic naturally and understandably has trouble acclimating herself to the outside world at first, but it’s Flo’s past and present transgressions that will ultimately come back to create tension within the new life they are attempting to forge together.

As with Curling, Cote once again proves to be a master at understanding the subtleties of the human condition, infusing his work with often uncomfortably laugh out loud humour and a sense of awkwardness that only the uncertainties in life can bring. To say that Vic and Flo are living their lives in a current state of flux is an understatement. Flo doesn’t seem to trust anyone given her sordid past, while Vic seemingly wants to trust everyone on first glance, including a local water inspector (a great Marie Brassard, giving the film’s most layered performance) who isn’t at all who she appears to be. In fact, the only person Vic seems to doubt the most initially is Flo. They have a moderately healthy relationship, but through their performances Robitaille and Bohringer give off the scent that things could be coming to an end for them at any time if one of them steps out of line. A great scene where Vic explains to Flo how she fears everything (including fear itself) is a lot like a coded talk in a relationship going south where one person can’t quite say they are afraid they might start resenting their lover.

Cote often mines his own material for an outlying sense of humour, and sometimes it’s not expressly meant to be funny. The film’s opening sequence involving a young boy trying to hustle pocket change by trumpeting out the worst “Frere Jacques” you’ll hopefully ever hear, absolutely slays. But later when the joke gets a callback, it’s not meant to be as amusing. Grondin’s superbly realized nice guy-slash-audience surrogate gets the brunt of Flo’s open derision in a sequence where she tries coxing him into a dumpster to prove a point, and gets gently mocked by Cote during a “field trip” to a railway museum. Even the sarcasm that seems to be a go-to mode of conversation for Vic isn’t necessarily meant to be funny, but there to be exposed for the defense mechanism it so openly is.

Cote has also by now mastered the art of creating idyllic settings that never equates to an ideal situation for his subjects. This backwoods community is gorgeously shot by Ian Lagarde, doing some impressive work on what’s only his first job shooting a full length feature. But no matter how good the scenery looks, there’s always a sense that something is off. There are plenty of trees, but the fields are unkempt and the plethora of gravel driveways and the bare bones local tavern seem almost designed to keep all by the most hardened of locals out. The attitudes of the people around Vic, Flo, and Guillaume seem to fall into only two categories: those who can’t wait to leave and are only there out of obligation and those who want everyone else around them to leave town. In short, it’s one of the unhealthiest environments for an ex-con wanting to reacquaint themselves with society or even if they want to be left alone.

Cote employs a foreboding, percussion heavy score to indicate and foreshadow that something is a little off in this sleepy hamlet, but while he does manage one really great unforeseen twist towards the conclusion of the film, he’s also employing a red herring character that feels tacked on and his climax here, while certainly unexpected and intense, feels almost like a shrug rather than a fully blown resolution. It certainly looks like Cote wants to go out with a bang, but despite what happens (and like always, I refuse to spoil what it is exactly) the film fizzles out.

Having said that, it is a film that I want to catch a second time despite not really being sold on the ending. I think I got everything I was going to get out of the movie on the first watch, so a second viewing would really be able to determine once and for all if the last ten minutes or so actually work. They aren’t a bad ten minutes, though. Even with Cote’s stance that can maintain that realistic filmmaking doesn’t need to adhere to a set of narrative rules, something about it feels weak or like it was pushed too hard. That doesn’t mean the film isn’t worth seeing. It’s unquestionably the most intellectually stimulating film to come out this weekend.