Captain Marvel made over $1 billion in movie theatres this spring, elevating the character from a trivia answer amongst comic book nerds to a full on superhero icon. Her costume will officially be a Halloween and Comic-Con staple for years to come. In theory, that means the movie should also be an iconic piece of pop culture that’s endlessly memed, parodied, and quoted. Yet, unlike last’s year’s similarly timed and similarly successful Black Panther, that’s just not happening. It’s not that the movie is bad, just middle of the road. It’s the power of the Marvel brand and the need everyone felt to see the last entry in the endless franchise before Endgame that pushed the blockbuster over a billion more than anything else. Otherwise, Captain Marvel is one of the most mediocre MCU movies in years. That still means it’s better than almost any DCEU movie, but that ain’t saying much.

According to movie review convention, a plot summary should come next, but I’m not going to bother. This movie’s plot is needlessly convoluted as a means of injecting some life into Captain Marvel’s forgettable origin. You see, not all iconic superheroes have iconic origin story. Captain Marvel is a particularly weird case where there isn’t even a single canonical origin for the character, but a collection of stories about various people named Captain Marvel who have popped up in Marvel comics for decades. The Captain Marvel that Brie Larson plays is indeed beloved within the contemporary Marvel Universe, but more for what she represents than any particularly memorable storylines. It’s a problem that the MCU brain trust will face as they pull deeper and deeper cuts out of Stan Lee’s vault to populate their cinematic universe. Hopefully origin stories will start being pushed aside in general, since most kids’ first Marvel comic was purchased at a convenience store at random and a paragraph of plot summary was all they needed to dive into a more exciting story than yet another birth-of-a-hero journey.

Still, the movie does it’s best to tell an origin story that no one really needed. Indie intimate character drama darlings Anna Boden and Ryan Fleck were an interesting choice to direct the project. They focus more on the character beats and emotion than spectacle, mining far more of both than should be possible. Their choice to turn Captain Marvel’s origin into a Bourne Identity style mystery was a wise way to mask a tedious tale in broken psychology and brooding pain that is far more resonant than it should be (ditto their geeky gottcha reversal of turning the Skrulls into the good guys in that massive war, inverting Marvel history and saving the inevitable superhero Invasion Of The Body Snatchers picture for another phase in the endless franchise). Yet, the blockbuster is at it’s best when doing that quippy Marvel thing, giving Brie and Sam Jackson a lovable bickering buddy cop routine and delivering the finest big screen feline since Inside Llewyn Davis.

Brie Larson also cuts quite a presence on screen, despite not having much depth or character to play. Captain Marvel suffers from the Superman problem of being too powerful to ever face real danger and too pure to have much character. Now that she’s established within the MCU, the folks behind that franchise will come up with more interesting things to do with her. It’s entirely possible. Most superheroes get interesting once they are firmly established enough for creators to re-invent and toy with their personas. After all, it took too disappointingly dull Thor movies before Taika Waititi got to come in make that chunk of hunk interesting. That’ll likely happen with Captain Marvel eventually too. This movie is all heavy lifting and thankfully that necessary evil is over. Now things should get interesting. Maybe. Hopefully. Either way, the character has clearly only made its first few billion dollars for Disney. Much more to come. 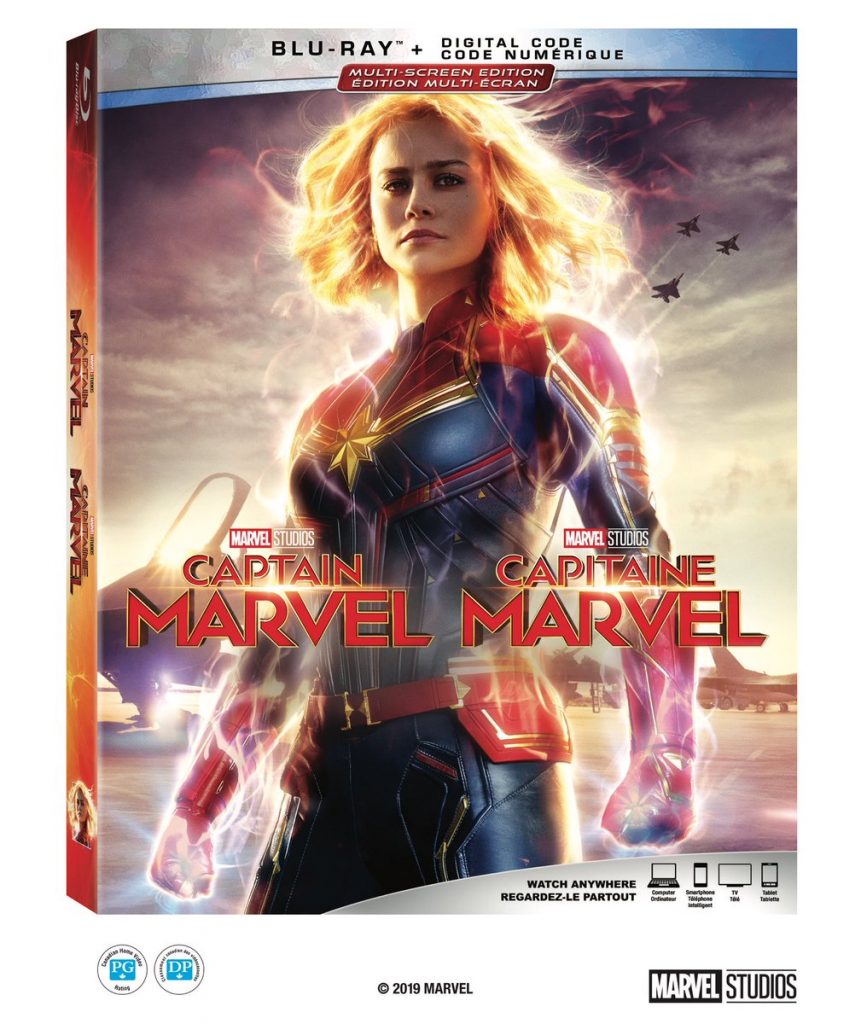 This is a Disney Blu-ray, so it looks and sounds as good as any blockbuster Blu-ray can. The transfer delivers vibrant colors, clear details, rich depth, and the pleasant glow standard in all Marvel movies. Sure, murky and confusingly edited moments don’t shine in HD, but they didn’t look great in the theatre either. The DTS-HD Master Audio 7.1 track is boisterous and atmospheric. Definitely worth cranking up until the neighbours get angry, even (perhaps especially) when the gratuitous 90s needle drops are at their most obnoxious.

Making Of Doc: Sure, it’s listed on the disc as six featurettes, but that’s just the ADD formula that the folks at Marvel Studios have always applied to their making of docs. Select “Play All” and it all amounts to a 25-minute documentary with just slightly more content than a typical puffy promotional EPK. Hoping to discover some details about the comic book origins of the character? Look elsewhere, that’s simply too convoluted and twisted of a tale to tell here (which is a shame because the comic book history lessons are often the best part of these discs). You won’t even hear from any of the five credited writers on the script other than the directors. That’s probably telling of how fraught the writing process was and such stories would be far too entertaining and disparaging to share on an official Disney Blu-ray.

Instead Brie Larson takes centre stage, discussing the symbolic importance of playing the first female hero to headline a Marvel movie, her rigorous training process, and the joy she experienced making the film. Co-writer/directors Ryan Fleck and Anna Boden, Sam Jackson, Kevin Fiege, and a few other Marvel lackies toss in their own platitudes and praise. It’s all rather pleasant, giving the impression that everyone involved was passionate and proud of the project and how it fits into the MCU, while avoiding much detail and insight. It would be frustrating if that wasn’t the well established formula for Marvel ‘making of’ docs over the last ten years. If you’ve watched any of them before, you’ll know what to expect. There’s rat-a-tat editing, lots of clips from the movie, smatterings of behind the scenes footage, and an endless stream of friendly sound bites. If you love the movie and want to hear some broad basics about it’s production, you’ll get that in fairly entertaining fashion. Just don’t expect depth or surprises. That’s not what these features are about.

Deleted Scenes: Despite all of the nonsense Twitter controversy about a certain deleted scene, there’s not much to get excited about here. Just a handful of beats that were cut for a reason and won’t be spoken of again (mostly removed from the stumbling opening sequence). However, anyone desperate for more scenes of Jude Law being quietly emotional should run out and buy this disc immediately.

Gag Reel: Making movies is fun. Sometimes you mess up and giggle, that gets cut into a two minute reel for the wrap party that the crew finds hilarious, and then some half awake fan watches it at two in the morning 18-months later and smirks for thirty seconds before turning it off early. Yes, these are still included on Blu-rays. No, I don’t know why.

Audio Commentary: Anyone looking for behind the scene tidbits about Captain Marvel that weren’t already hammered into their heads during the press tour will find it on the director’s commentary with Anna Boden and Ryan Fleck. The duo aren’t the most exciting speakers, but they are intelligent, underrated, and passionate filmmakers who have plenty to say. It’s a breezy track with the duo charmingly still seeming amazed by the fact that they were given the opportunity to make a giant blockbuster. Nothing too earth shattering pops up in their chat, but you do get to find out which scenes were inspired by Eternal Sunshine Of The Spotless Mind, Gimmie Shelter, The French Connection