The much-hyped season five alternate-medium episode of Community is a Hasbro approved G.I. Joe parody called “G.I. Jeff,” and it is almost exactly what you would expect from reading that statement.

This is the eleventh episode to air after Dan Harmon’s successful return to the show he lovingly created more than five years ago. It is almost fully animated, courtesy of his animation house, Starburns Industries (who are normally responsible for bringing Harmon’s other current show, Adult Swim’s Rick and Morty, to life), and filled to the brim with nostalgia and meta-humour.

“G.I. Jeff” opens in the middle of a Cobra attack on the Taj Mahal and immediately we see why – no matter what you might end up thinking about the coming 20 minutes – Community has already reset the bar for tribute episodes. These aren’t Cobra Commando rip offs, they are the actual characters, and as classic animated bad guy Destro escapes his downed jet you can rest assured that there won’t be any ten cent winks to the camera while the writers narrowly escape a lawsuit. This is a legit G.I. Joe episode.

Jeff, Shirley, Annie, and Britta have all been given 80’s cartoon makeovers and names that would look great on the blister pack of an action figure. They are (in order): Wingman, Three Kids, Tight Ship, and Buzzkill (Britta has a buzz saw on her arm, making her most worth a couple weeks’ worth of allowance in my books).

After putting a stop to Destro’s cold open plan to destroy the tourist attraction with zero tactical value, Wingman has a moment of meta-lucidity and accidentally makes things a little too real for Saturday morning. He decides to put an end to Destro’s weekly terrorism and perforates his parachute, causing the first ever real casualty in all of G.I. Joe’s highly merchandised war on terror.

We are then treated to a pitch perfect alternate intro, fully recreating the original G.I. Joe: A Real American Hero opening credit sequence with parody lyrics that say it all with the spoken word expository break down:

“G.I. Joe is the codename for America’s daring awesomely trained awesome mission force. It’s purpose: to fight Cobra, because they’re terrorists. Look, I think I’m over explaining it. The bad guys are snakes and the good guys are army people.” 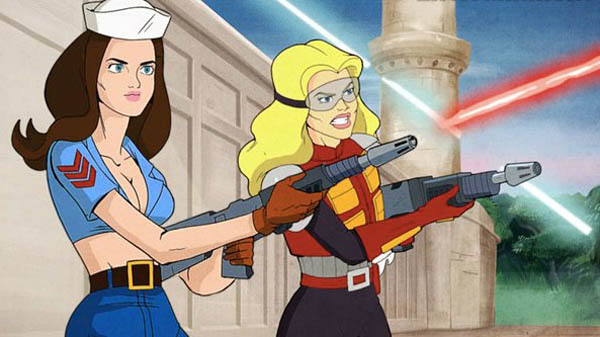 At this point, the fan service continues, but Community has set a precedent for making these fun departures into character exploration exercises, so there is an implied mystery afoot as well: Who is imagining this? Why? And does it matter?

Part of me just wants to answer those and be done with it all together. This is Jeff’s fantasy. He has retreated into his mind because it’s his 40th birthday and he doesn’t want to grow up (also he overdosed on “youth pills” he chased with brown liquor). No, it doesn’t matter because just like the last time Jeff had a dream for an entire episode (the dismal season four finale “Advanced Introduction to Finality”), none of the characters are real, the conversations don’t happen and nothing is really at stake.

But it’s still the G.I. Joe episode, and even if you didn’t grow up watching the cartoons or playing with the toys (I was a Transformers kid, personally) “G.I. Jeff” is an extremely fun cartoon that also serves as a neat examination of how it feels to grow up.

After the custom credits and faux title card that nails the nonsensical names that writers used to bestow on cartoons made to sell toys (“Government Issue Jeff”), Wingman, Tight Ship, Three Kids, and Buzz Kill are all on trial for murder. They quickly lose and are imprisoned with the reject Joes (including an animated Harmon, code named: Sleep Apnea) and Abed’s G.I avatar, Fourth Wall.

As is his role in these episodes, Abed understands that this world is a cartoon and that beyond it is a reality with a third dimension. As Fourth Wall starts to make good on his namesake, talking about a place codenamed “Greendale,” Wingman’s reality starts to shift (complete with ghostly hospital beeps) and we get treated to an action figure commercial featuring the corresponding toys to our heroes and their signature flying submarine vehicle, the Submachoppter.

We come back to a scene – that if we’re being real sticklers about the whole Jeff’s dream thing – must be taking place in and even less conscious part of the hospitalized Winger’s brain. Cobra Commander (guest voice Rob Schrab, who also directed this episode) is eulogizing Destro when he is interrupted by Dean Pelton’s avatar via Cobra Communicator.

Back in prison, where the characters are all for sure being conceptualized by Jeff’s ego, a cartoon version of Dan Harmon is chatting up Tight Ship, explaining how one develops his trademark breathing condition, as one of the inmates details his in-progress escape plan that involved Shawshank-Redemption-ing the wall in his cell, eating the dirt, and listening to enough Smash Mouth that the band poster covering up the tunnel out wouldn’t look suspicious.

Cobra destroys the wall next to the tunnel, and that’s how the inmates escape.

Despite his retreat into nostalgia-land, Wingman’s adult mind still won’t let him not believe in death, so instead of providing suppressing fire during the escape, he murders the cartoons trying to contain him and his imaginary friends. 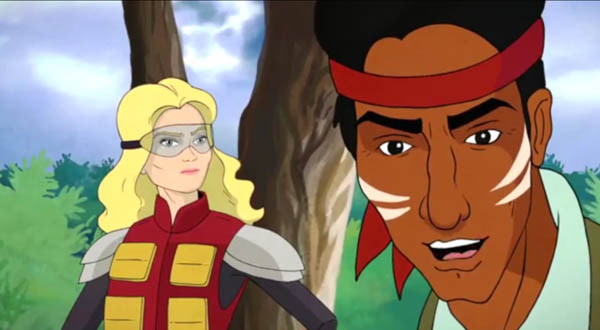 Everyone makes it to the Submachoppter in one piece, and Fourth Wall says “Greendale” again, making Jeff pass out and ascend into the commercial dimension.

We come back from real commercials to a fake G.I. Joe ad casting the Save Greendale Committee as a limited edition line dubbed the Mutineers.

In the cartoon world, these mutineers are making it closer to the answers hidden in Jeff’s mind, making it to an underground illustrated version of Greendale that is also the base of operations for Cobra Commander versions of Dean, Buzz, Duncan, and Chang (Vice Assistant Cobra Commander, Major Dick, Zim Zam, and Overkill respectively).

After making it to the cartoon Table Mk II and defeating each of their lesser friends by shooting two the leg and watching as Major Dick throws out his back attempting a cool flip move, the Save Greendale Committee gets the climactic reality check this has all been leading to.

Fourth Wall can explain it on a technical level, with diagrams and everything, but Jeff does it with emotions. He lets everyone (or just us and himself) in on the youth pill mishap that started this whole thing.

Fully lucid in this Hasbro sponsored dream, Jeff chooses to live in G.I. Joe with the action figure versions of all the people he loves.

Cobra and G.I. Joe also also have a moment of clarity, realizing that if they don’t really want to kill each other they should just team up. They destroy a wall and enter the study room as Jobra. Wingman tries to tell them that he is the Neo fromt the third act of The Matrix that is his mind, but before he can finish explaining why he never got around to seeing the third movie in that particular trilogy he is knocked into deeper unconsciousness.

Cartoon Wingman pleads with his captors. He wants them to all join forces and have a great time just hanging out together and blowing stuff up.

The Jobras buy in to the deal and get straight to business, asking Wingman the biggest question on an adult-trapped-in-a-children’s-cartoon’s mind: “So… What do boobies look like? 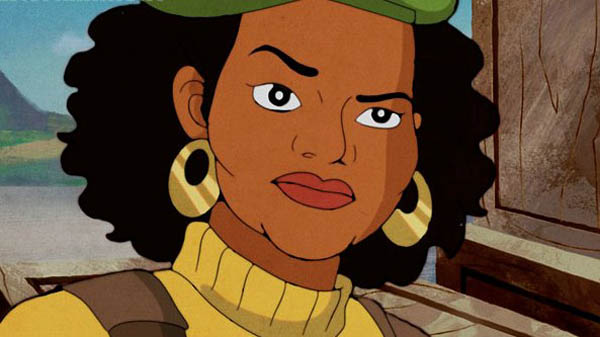 Yes, if Jeff wants to retreat into childhood he will have to give up being an adult. He can’t just have the Cobra terrorists of his bygone thirties team up with the G.I. Joe of his idealized childhood into some sort of emotional Jobra Jeff. He has to take responsibility.

Wingman hijacks a his signature Wingpack and attempts to escape to reality, but Cobra Commander doesn’t want to miss this opportunity to escape the cage of Jeff’s mind and see what boobs really look like.

The escape is a fun climax to the commercial aspect of the episode, with a child actor playing the role of an unknowing gate keeper between reality and an excellent 20 minute G.I. Joe reference. The call to action on the final commercial segment puts a button on the lesson (“Everyone dies eventually”) and Jeff wakes up in the hospital bed we expected him to be in.

A classic sitcom hospital confessional ending happens with a few laughs and in the credits Fourth Wall and Buzz Kill send up a G.I. Joe public service announcement about the messages of heavy handed cartoons on tiny gen-Xers.

“G.I. Jeff” features amazing, period style animation that perfectly parodies the referenced material (right down to the grainy picture quality), while also taking exciting risks with the storytelling potential of fake action figure commercials. It is nothing if not ambitious.

For an episode of Community though, stories that rely on this much suspension of disbelief can only truly stand up to the show’s high standard of quality if the whole Greendale team is working together in imagining the altered reality. The best case scenario is a Dungeons and Dragons episode or “Geothermal Escapism” which featured Troy’s goodbye. The worst case is the aforementioned “Introduction to Advanced Finality.”

A lot of great G.I. Joe jokes were had here, and that was enough to make the half hour enjoyable. There is always missed potential when the characters of a show are divorced from consequence and in a show with such a lovable cast, making most of them figments of another’s imagination leaves an episode hollow.

In the final scene Abed interjects with, “Remember that christmas when I-” referring to the last time the show did something this ambitious a claymation episode.

That meta comment highlighted the problem with G.I. Jeff best: everybody can remember that happening (that’s why they silence him), but nobody other than Jeff will ever even know about the Submachoppter.