Dork Shelf was out in full force for last week’s PlayStation Holiday Preview Event, where we got our hands on some of the year’s most anticipated titles. Read on for quick-hit thoughts and first impressions from our game writers Jon Ore, Eric Weiss, and Zack Kotzer from the annual Sony extravaganza.

The game’s premise allows for travel to any historical era in any part of the world, but after three years of Italian shenanigans it’s been a while since Ubisoft tapped into that sense of geographical anticipation. Fortunately, it’s making up for centuries of lost time with Assassin’s Creed III. If the fantastic naval warfare is any indication, it should make a much bigger splash than last year’s Revelations.

I haven’t seen enough to speculate about any substantial gameplay differences, but the core mechanics have always been solid and there’s no reason to suspect that Assassin’s Creed III will fail to live up to its predecessors. As long as it’s competent, we’ll be able to fully engage with the early American setting and as a transplanted American, I can’t wait to see how the developers have incorporated the monumental historical era. – Eric Weiss

Injustice: Gods Among Us

Last year, Mortal Kombat kame back in a big way. It delivered. It felt like playing a more gratuitous, sharper version of the originals, the ones that people liked. It felt like a natural evolution of the series. Injustice is the team behind it letting success get to their head.

The heroes of the DCU are all trying to kill each other, and I have no idea why since WB is keeping tight-lipped about, oh, everything. You can keep trying to look for a gestural reaction to shouting “Animal Man” over and over but they’ll be pretty stone-faced. The good news is that the character selection screen has a lot of slots, albeit filled with greyed out generic silhouettes. Until then you can, once again, play as Batman, Wonder Woman, Superman, the Flash, with Grundy and Harley as the only less-than-common combatants. Their outfits still bug me as much as the first day I saw them. Batman and Superman look like unsold action figures, though Grundy’s trip through the MacFarlane machine, sporting blades jabbed in his back, is interesting enough to work.

I saw the appearance coming a debut trailer away, but I am more disappointed by how it actually plays. Perhaps it’s just an early build, but the combat feels sluggish and stiff. The fighting and fighters from Mortal Kombat were faithfully adapted from the oldest entries, but they’re starting from scratch on this one and seem to be getting hung up on some of my least favourite features, like the weapon-swapping calamity from some of the PS2 games.

Injustice isn’t in a nose-dive but I am concerned. Violent DC superheroes aren’t much of a hook after MK vs DCU proved the concept didn’t hold much water. I’m not holding out for a brilliant story, which I’m sure will just be earnestly dumb. My reservations of hope are redirected to remembering what a brilliant job NetherRealm did with Mortal Kombat. – Zack Kotzer 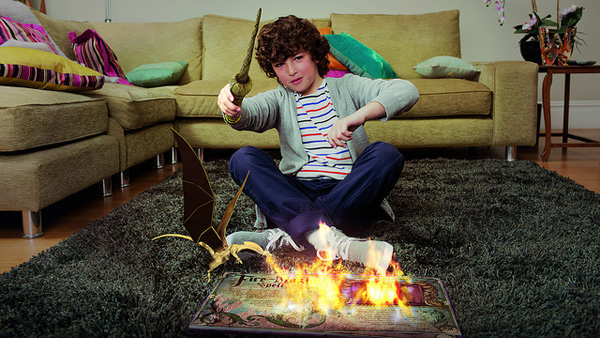 The Wonderbook might be a bigger hit than you think. It’s essentially a pop-up book on steroids, and if you had a pop-up book when you were five, you should know why that’s appealing. Sony’s Move gadget is a nearly perfect blend of concept, technology, and target audience, and it’ll be interesting to see if it catches on with families during the holidays.

And please, don’t dismiss it just because you’re a hardcore gamer. The Wonderbook is unapologetically designed as a toy for children, and packed with a youthful blend of wonder, whimsy, and imagination. The Harry Potter license with Book of Spells admittedly helps – that, more than anything else, is what will catch parental attention in the toy aisle – but the product delivers on the promise. Parents with young kids won’t be disappointed.

As for the rest of us, the graphics aren’t as good as Crysis and the controls aren’t as tight as God of War. Then again, they don’t need to be. The simple mini-games and fairy tale visuals are surprisingly absorbing, and the end result is pure family-friendly fun. I’m not planning to pick one up, but Wonderbook is a great gizmo for the right crowd. It has potential uses as an immersive educational tool for children, and that makes it a peripheral worthy of excitement. – EW

I’ve been riding the Kratos chain train since it left the station with the first God of War, primarily because it’s always been one of the most consistently entertaining franchises. Ascension, sadly, looks to be more consistent than entertaining.

The controls are tight, the graphics are polished, and the series still has the same spectacular flair for gore and excess. I just don’t know why we’re still following Kratos after God of War III provided an appropriate conclusion. Ascension will probably be a lot of fun to play – no series goes through the motions quite as well as God of War – but there’s no denying that Kratos seems to have lost some of the vengeful urgency that made prior outings so compelling. – EW

Funny. Everyone knows Sony wants to make its own Super Smash Bros. Frankly, I don’t see anything wrong with that. Smash Bros. is fun, I like Parappa, mazel tov. But I’m certain the pride of the developers and the house of Sony which brands them would rather tug attention away from the blatancy and maybe even make the game play different. And in doing so have created a much more mediocre game.

A recognizable roster of virtual heroes and antiheros (and one Japanese mascot completely unknown to the west) bout it out in what is a collapsing video game dimension. While Smash Bros.’ typically slighted its backstory to let web theorizers mull over, All-Stars will be much more explicit to the manner of the mayhem. I was told that something happened to spark this bombastic crossover.

Stages are primarily based on one game entry, but within that stage is a dogpile of cameos, charming meshes between God of War and Patapon, or Jak and Daxter with Hot Shots Golf.

The other key difference is how it plays, and this is where instead of pushing forward, elements are stripped back. Like Smash Bros., each character has similarly mapped attacks, but more so than Smash Bros. many of the characters feel the same when you play them. At first I was confused by this sensation, because there were obvious differences — Big Daddy and Sweet Tooth went nuts for weapons and projectiles where Kratos and Parappa liked to get up close and personal. But then I figured it out. My character selection felt redundant not because of the characters themselves, but the objective of the game.

Smash Bros. has a to-and-fro ring-out mindset: wail on your opponent and find opportunities to knock them out of the park. All-Stars is just about the wailing, and it feels mindless. To defeat your opponents, all you need to do is hit them with a special move. Special moves are earned by building up a super charge, which is filled by bashing other players or collecting energy dropped on the stage. Building up your charge will change your special move (everyone has three versions) to have a larger range of attack, but each only require you to hit the player to win.

It’s not very interesting, and as I played with others there wasn’t much animosity because we also couldn’t tell who was winning. It feels dull, and I don’t just mean boring — I never felt a competitive response. For someone excited for the charm of Fat Princess slapping around Heihachi, you’ll be plenty pleased. But for those hoping for Sony being given a taste of what Nintendo’s been dining on for years, that pleasure’s been revoked, and consciously at that. – ZK

Time for a brief confession: I’ve never played a Hitman game. A few minutes with Absolution, though, I’m thinking it might be time to take the plunge.

If you’re looking for a cerebral stealth game that rewards creative thinking and discretion, Absolution looks to have you covered. I managed to poison a drug lord with toxic fish while hiding behind a dinner menu with two cops looking over my shoulder, and that was only one of the multitudinous options available in a dangerous and densely populated marketplace in Chinatown.

Throw in a robust online challenge mode – anyone can create level-specific contracts with numerous targets and stipulations and upload them for other players – and Hitman: Absolution should even be a game that rewards multiple strategies and playthroughs. That atrocious E3 trailer is not reflective of Hitman: Absolution. Hopefully – and ironically – that will also remind a few marketing departments that video games don’t need fetish nuns to be engaging. – EW

This fall, I want you, the people, to vote Revengeance for president. In its short history, Platinum Games has been campaigning for your utmost respect and adoration. Even if its so-much of too-much direction grinds on mindful audiences, the playful mechanics of Bayonetta, MadWorld, and especially Vanquish, prove that Platinum is capable of delivering precisely the experience they set out to deliver. Its tight controls are miraculous and its understanding of entertainment is compelling.

Sword in hand and the ability to outrun bullets, the Metal Gear Solid branding made me feel that the logical plan of action was to sneak up behind an unsuspecting cyber-guard. Nope. You stab him or thrash him or cut him in two. There are many ways to dispose of foes and this MGS doesn’t ask of you to do it quietly. Raiden moves quickly — if you’re bolting towards a chest-high obstacle, the game knows you want to do a blitzing hop over it.

I nearly forgot about “sword mode” until the talking cyborg-dog with a chainsaw was moving much too fast to hit normally. Sword mode, as I’m sure you’ve seen, slows down time so that you can manually maneuver the lightning-fast swishes of Raiden’s blade, making for some satisfying dismembering of your foes. Some enemies need to be chopped rather precisely, and you’re awarded for lopping off left hands.

Revengeance knows its momentum, and just like that wonderful Vanquish, the game knows how to unleash a calamity of violence without taking tactile controls away from you. There is no auto-pilot, but it’s not intimidating to drive manual. Bless you, Platinum. – ZK

Read on for Part 2 of Dork Shelf’s coverage of the Sony PlayStation Holiday Preview.