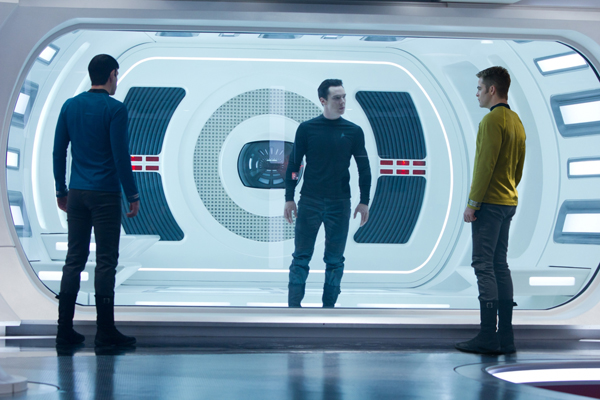 Let me be the guy to preface this with the phrase “let me be the guy to preface this.” I am not a massive Star Trek fan. Quite astoundingly in my more than fifteen years of writing about films I have never had to write a single review of any Star Trek film before now. It just never became my assignment. Also, before you think this review is coming from a novice perspective on the series, note that I have seen a good chunk of the original series, relatively all of The Next Generation and all of the movies except for Nemesis, which I hear I was wise to avoid in the first place. I’ve liked the majority of what I’ve seen, but I wouldn’t consider myself a “fan” in the truest sense. It’s not something I can pretend to have a deep undying love for.

One thing that I have is a huge respect for those who love the series, and it’s with that in mind that I strongly recommend the latest entry in the re-boot of the series Star Trek Into Darkness somewhat enthusiastically for casual observers of the series, but I feel the need to sit down with my closest Trek loving friends to sort of suss out their feelings about it. While it makes numerous references to past Star Trek canon and it’s overall a better film than the sometimes sloppy time travel narrative that made up J.J. Abram’s first go at the franchise, something about the film’s climax doesn’t stick quite right with me. It’s good in a lot of ways, but I have a nagging doubt that the people who love the series the way it used to be might find themselves divided over what the film ultimately accomplishes.

After a botched mission to save an endangered civilization, the rebellious, young Captain James T. Kirk (Chris Pine) not only sees his command of the U.S.S. Enterprise taken away from him, but a wedge driven between his blossoming partnership and friendship with his second in command Spock (Zachary Quinto). He’s brought back into the fold and put back in charge, however, when Starfleet is asked to go beyond their usual exploration missions and take on a military operation. The objective: hunt down and kill a mysterious fugitive and terrorist (Benedict Cumberbatch) that has attacked Starfleet head on twice before escaping to a Klingon planet where no one would usually dare follow.

Not all is what it seems all around and the script from Roberto Orci, Alex Kurtzman, and Damon Lindelof  is particularly adept with handling the film’s numerous plotting and tonal changes without succumbing to the kind of over complicating that these three writers have been taken to task for in the past. There’s a lot going on in this film, but there’s much more of a balance without a lot of useless filler. There’s no recap of who the characters are and no new origin stories to really be told aside from that of the main villain. It wisely assumes that fans don’t need to be told  over and over again the functions of these characters, and it sets out right from the start to make sure they are pleased first and foremost without boring the audience that has little knowledge or investment in the series.

This is some pretty fleet-footed stuff that falls nicely in line thematically with the M.O. of the original series and delivers some of the best action set pieces one is likely to find in major blockbuster cinema. J.J. Abrams might have cut back considerably on his sometimes mock-able love of lens flares, but he certainly hasn’t diminished himself as a solid storyteller. It’s a classical revenge yarn where both sides of an equation yearn to right a wrong by any means necessary, and it ends up becoming exactly the kind of topical and subtextaully rich kind of narrative that Gene Roddenberry would be proud of. In it’s smartest moments, the film is actually a pretty open and biting commentary on how the American hunt for Osama bin Laden squarely points the finger of blame back on the actions of their own government. The Enterprise is asked to clean up something the Federation screwed up on ages ago, is forced to go to a place where they have a tenuous agreement to stay out of, and they have to track down a terrorist that has twice attacked on domestic soil that they helped to create. Sounds pretty familiar, doesn’t it?

But aside from having rich subtext, the film also adheres to the same kind of back to basics and almost brutalist kind of storytelling that made Skyfall such a success for the Bond franchise last year. No one here is necessarily broken, but at every step of the journey, the crew of the Enterprise is forced to do without all of the special gadgets and tricks that used to make their lives so much simpler. There are distinct limitations in terms of what they can and can’t do here, creating an interesting sort of tension that was missing from the first film.

The large scale set pieces are as dazzling this time out as they were before, with an absolutely gorgeous looking San Francisco based climax sequence, an early movie race against time and an active volcano, and it even manages not one, but a pair of well staged shootouts at different points in the film that make perfect sense. The emphasis is undoubtedly on making the action bigger and better, and Abrams and company have assuredly succeeded.

I had been a bit harsh on Chris Pine in the past and some of his performances in lesser films that I felt had been delivered on autopilot, but here he firmly and definitively ascends to the throne of Captain Kirk. Gone for the most part is his youthful brashness (but not his standing as a ladies man), and it has become modified into a form of cowboy heroics. His previous missions having been successful, he thinks he knows the job inside and out and that the rules don’t apply to him. But this time, there seems to be a lot more conviction in Pine’s performance than surface arrogance. There’s know waffling on the part of Kirk this time out. If he says he’s going to do something, he won’t say he thinks he can do it, he’ll tell you to your face that he KNOWS he can do it.

Zachary Quinto’s Spock has similarly grown in terms of both logical abilities and his own struggle to deal with his half-human emotional side. It puts him at odds with his lover and co-worker Uhura (Zoe Saldana, who also puts in some great work) and estranges him from Kirk early on. Towards the end of the film, cracks begin to show in Spock’s façade, but to say any more would induce spoilers.

As for the rest of the Enterprise crew, the only cast member who sees a decidedly beefed up role here is Simon Pegg’s Scotty, who thanks to an open disagreement with Kirk ends up having his own side plot. John Cho’s Sulu gets a chance to branch out a little bit as a leader. Anton Yelchin’s Chekov gets a new job assignment with less than intended results. There’s the addition of Alice Eve as a new crew member with a pretty easy to figure out secret who is really only there to get them out of two specific jams, almost as if she’s simply a plot device that’s just written into the fabric of the film. In terms of the high level Starfleet brass, Bruce Greenwood returns as Admiral Pike, the one man who always believes in Kirk without always agree with him, and Peter Weller does some spectacular work as a higher ranking official with, again, a whole lot of secrets and a deathly gung ho attitude. On a sillier side note, Karl Urban’s Bones has become almost the perfect spitting image of DeForest Kelley’s original creation in the role. It’s one of the best performance based homages of its kind, here.

The main thing most probably want to know about, however, is how Cumberbatch handles the role of chief heavy, and the answer is that he handles himself quite brilliantly. His terrorist acts as the perfect mid-point between Spock and Kirk’s personalities: his logic is ruthlessly efficient and his emotions have the ability to push him further than even Kirk is willing to go. He’s doing phenomenal work in a role that will unquestionably elevate his stature beyond just cult status in North America.

As you can tell, there are a lot of great things to be said in defence of Star Trek Into Darkness, and overall it’s a step up in every way from the previous entry. But there’s still the matter of the ending, which I admire in terms of how the actors are pulling it all off, the conviction that Abrams shows in mounting it, and the grandeur of the three major set pieces that it’s constructed from, but I don’t even know if I am entirely sold on it. I wouldn’t dream of spoiling it, as arguably too much of the film has been spoiled already, but I will say that while it doesn’t necessarily re-write Star Trek mythology in a detrimental way, there’s something a bit too “cute” about it, and a strangely nostalgic note in a film that seems to be moving forward. It’s also not a terribly original note to go out on. It’s strange and overall I think it will be up to true fans of the franchise as a whole to debate its merits because it leads to questions and open criticisms that I don’t feel comfortable making.

That’s what leads me to think it’s kind of brilliant where the story ultimately ends up. It seems to be openly courting discussion that the rest of the movie backs up tonally and thematically. It comes full circle and beings being about the fans again by giving them something to chew on rather than empty plotting. Also, and probably most importantly, it’s just a great bit of fun.