“When the ship sets sail, be sure you’re aboard.” – Lieutenant Hodgson

Peter: There’s a skeleton crew on Terror, skeletal seamen sledging for rescue, and skeletons in Mr. Hickey’s closet. This week’s episode of The Terror opens with a confusing flashback of a young boy signing up for his virgin voyage with the Discovery Service. Getting the signature of Lieutenant Hodgson, the young man has papers calling him Cornelius Hickey. Because this show is stacked to the gunwales with white Englishmen, I initially read the scene as a deep flashback to Hickey’s very first voyage. But by the end of yet another fantastic hour of doomcore on ice, I understood: we know even less of the incorrigible Mr. Hickey than we thought.

Will: I think we both assumed by this point in the series that there was more to the sly caulker’s mate than he let on, ever since that rather strange exchange between he and “fellow Irishman” Captain Crozier in episode two. Despite their decidedly more bright and healthy appearance, I immediately recognized the ship and her crew in the flashback, but I did not recognize the young lad Mr. Hodgson addressed as Hickey. My first thought was “Oh, well at least that poor boy was spared the horrors of the Arctic voyage,” but then I began asking myself just how did Mr. Hickey… or whoever he really is… come to take this lad’s place? There are sinister implications here.

Slightly less sinister (but not by much) is the scene that follows it. As the expedition moves to abandon ship and begin the long march south, Hickey, Irving, Tozer and others are now openly planning to desert and make a go of it themselves. I expect they won’t go peacefully.

Peter: Once the sledging party finally makes it to Terror Camp on King William Island we are treated to one of The Terror’s signature monologues by Mr. Collins, the poor depressed man who was compelled last week to attend the Carnival by the late Dr. Stanley – the same man who set the tent ablaze. Collins is haunted by the visceral reaction he had to the smell of his burning shipmates. They smelled like grease, he tells Mr. Goodsir, remembering how he salivated as they burned to death.

Will: Collins has not had an easy go of it on this trip, has he? The ship’s diver first experienced those terrible visions of death below the waves early in the series and now this. I can’t imagine. With most of the crew I simply worry for their physical well being – hauling the massive sledges is backbreaking work – but with Collins I see a man nearing a mental breaking point. At least Goodsir is willing to lend an ear, unlike his crispy former counterpart.

Peter: The looming spectre of cannibalism hangs over all of AMC’s The Terror, and we’re finally at the point when the c-word is all but on the lips of the men under Crozier’s command. The flashbacks and monologues up until now have implied that many veteran explorers have at least seriously considered eating human meat, but now we’re invited to actual practical conversations on the benefits of having a work friend for dinner.

Will: In fairness the conversation doesn’t immediately jump to eating crewmates. Initially Hickey and company seem satisfied with hungrily eyeing Neptune, the ship’s dog. Not exactly my first choice, but definitely understandable under the circumstances. Perhaps dog was the “worse” to which Sir John Ross referred when haranguing the boot-eating Franklin so many years ago, not what we’re thinking?

Peter: The pragmatism of the scenario Hickey poses to Lieutenant Hodgson after presenting him with a bag full of Neptune the Dog is intriguing. I have to admit that when I first watched this scene I assumed the bag contained human remains pilfered from the dead Morfin, and I think it’s safe to assume the dog is a human surrogate in terms of the thought experiment Cornelius is presenting: if you had a choice between eating lead tainted canned food and the antiscorbutic remains of a person who died for reasons other than being consumed, what would you do? It’s uncomfortable to admit that Hickey is making sense here, and I think it would be naive to assume Crozier and Goodsir haven’t also dwelt on the inevitability of chewing on long pig.

Will: Well, you’ve nearly convinced me! Wait a minute… Is it just a coincidence that you keep writing about TV shows featuring cannibalism, Peter? *slowly backs away*

Peter: What can I say? Some people just have a type, I guess.

It’s Not a Man

Peter: With all the revisions this show is making in regards to the novel it’s based on, I’m not taking anything for granted. That’s why I was delighted that the final sequence of “Horrible From Supper” was so faithfully translated to the screen. The only liberty taken in Mr. Hickey’s lethal dance with Irving is that in the book he’s fully nude.

Will: Hickey’s cold blooded murder of Farr and Irving – for the purposes of eating them no less – is the final turn for the caulker’s mate. Until now you could easily root for him, despite all the smarm and lying, but now the truth of what happened to the real Mr. Hickey is clear. No one kills with such ease if he’s never done it before. Cornelius Hickey is a bad man. How will he talk his way out of this? Or will he simply cut and stab his way out of trouble this time?

Peter: Hickey is almost as fantastic a murderer as he is a liar, but I don’t think he can fool the newly sober eye of Crozier’s scrutiny. The captain already smells mutiny on the wind. I think at this point the question is how quickly Hickey will be able to rally support for his starving promise of liberty.

Also worth noting here is the series’ conflation between the literary depictions of Goodsir and Irving. Goodsir’s on screen relationship with Lady Silence is adapted largely form Irving’s arc in the book, in which the Lieutenant actually spends time with the Netsilik woman in an igloo and witnesses her commune with the Tuunbaq. Irving in the show hasn’t had much development, so his death seems to serve the plot and Hickey’s own character transformations.

Will: The show’s version of Irving was a dick and a zealot to boot, so I can’t say I’m that sorry to see him go. I do feel sorry for how he went though. That’s a lot of stabbing. Yeesh! Kudos to the show’s music team for that twisted, creepy sting that accompanied the lieutenant’s terrible death.

Peter: The show’s score under that beautiful final shot of Hickey dancing about all alone under the everlasting light of an Arctic summer is what I’m here for. Also, I’m here for the cannibalism. It’s dinner time, everyone. 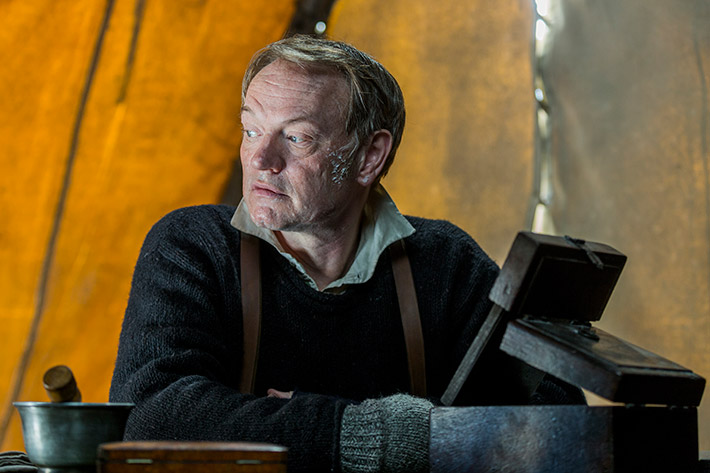 Peter: In the second flashback, it was heartbreaking to see Mr. Morfin report for duty in such good spirits.

Will: I mean, can you blame any of them for being so excited? He and most of the men can’t have known what awaited them, and being chosen for such a posting was the equivalent of being picked for the Apollo program. These sailors may have had the right stuff, but they picked the wrong ships.

Peter: While I understand that the characters are starving and cold, it’s a difficult thing to see sometimes. Even succumbing to scurvy and lead poisoning and starvation most of the characters on this show still look pretty good. That said, I have a feeling we’ll see the Terrors and Erebites fall apart a bit more in the coming weeks.

Will: That is almost a certainty. And as we bid adieu to HMS Erebus and Terror I wanted to relay one more fascinating fact about the mighty bomb ships that now lay on the bottom of the sea off King William Island. Terror famously took part in the War of 1812, including the Battle of Baltimore, where she provided the “bombs bursting in air” now sung about in the “Star-Spangled Banner”. A historic vessel, if ever there were one.

Peter: I mentioned above that humans are antiscorbutic, but it’s worth noting that it was only recently discovered that freshly killed meat has sufficient levels of vitamin C to ward off scurvy. I just mention this because even as pragmatic as Hickey’s case for man eating is, it would fall apart if the rations weren’t filled with maddening levels of lead.

Will: Now I’m not condoning murder or cannibalism, but there really is a grim practicality to it here that’s almost admirable, isn’t there? There’s no going back from this for anyone involved and Hickey has done the math: At this point any man is fair game.

Peter: I also want to emphasize that my cannibal sympathy here is mostly an affectation for your entertainment and that I do find the very concept quite upsetting.