“I think I made a connection tonight, me and it. Feel like we got engaged, I wanna celebrate.” – Ice Master Thomas Blanky

The Sound of Silence

Peter: We’re in the cold darkness of winter now, and things are getting claustrophobic on HMS Erebus and Terror. Cabin fever, stoked by fear of the terrible beast stalking and killing the remaining discovery servicemen, has the men under Fitzjames’ command abandoning the Christian God of their late great leader, Sir John Franklin. The men have taken to laying tokens of tribute to the Netsilik woman below deck who they think may be the key to protecting them from a gruesome fate.

Will: That sense of cabin fever isn’t just because of the fearsome -52 ° temperatures outside (that’s Fahrenheit – ouch!), the flagship Erebus, having taken on all but 10 of Terror’s crew, now houses most of the expedition’s men. Close quarters and too much time on one’s hands is bound to lead to a certain level of superstition.

Peter: Goodsir is also spending time with Lady Silence, whose nickname is all but a thing of the past now that she’s helping the surgeon compile an Inuktitut to English dictionary. This is remarkable for many reasons, the most prominent being yet another major revision of the horror novel source material. In Dan Simmons’ book Lady Silence is so called because she has no tongue. Politically, this revision is welcome, allowing for Nive Nielsen to act in Inuktitut, bringing the language of the North to this passion play about the toxic colonial paradigm.

Will: The young anatomist’s efforts to learn Silence’s language appear to be paying off, but he’s still no closer to providing an answer about what it is that is hunting the men. No doubt frustrated by Goodsir’s lack of progress on that front, Commander Fitzjames sees fit to make Lady Silence – and in turn Mr. Goodsir – Terror’s problem. In fact, Fitz seems to be in a deciding mood in the absence of Crozier (“Are we to have a command meeting without our commander again?”), tracing a line from their current position on the map to the Back River far to the south. Is he thinking of abandoning the ships?

Will: Cornelius Hickey’s backside is on the mend, but he’s still not supposed to lift anything heavy. As his crewmates drop dead on the ice and lose their digits to the frigid cold, Hickey gets light duty in the safety of the ship. Perhaps that brutal flogging had some advantages? With nothing but time and caulk on his hands, it’s likely Hickey has been scheming some way to get back at Crozier for all those lashes. He immediately perks up when Silence is brought aboard Terror – you can practically see the wheels turning in his head – and before we know it he’s attempting to flatter Mr. Goodsir and ply him for information. Goodsir, for all his naiveté in some matters aboard ship, has Hickey’s number though. “Does that really work with anyone, Mr. Hickey?” There’s wisdom in those mutton chops!

Peter: Positioning Goodsir as Hickey’s foil is an inspired bit of character placing. The sawbones’ ironic optimism, and his resistance to Cornelius’ Jedi mind tricks, help define both characters in opposition to one another. Strong minds of opposite paradigms. A hero and a villain. In the novel, the characters aren’t so quick to come to conflict. Yet another revision that makes AMC’s adaptation sparkle.

Will: When we spoke with actor Adam Nagaitis last month, he told us that Hickey’s relationship with Goodsir was his favourite of the whole series. The two characters haven’t interacted much so far, so I’m glad we’re finally seeing a fun dynamic begin to develop between the two characters. Harry Goodsir is proving he has more guile than we – or his crewmates – might have expected, particularly where medical matters are concerned. In a short but important scene following the exchange with Hickey, we see that Dr. McDonald (Charles Edwards) has taken a real shine to the young anatomist, even going so far as to say that Goodsir is sounding more and more like a full blown doctor of medicine. Peter, I’m so proud of him!

Peter: Our little mutton chopped bones boy is making a name for himself! (“I do wish you’d call me Harry.”) Hickey, meanwhile, has to spend some time with the dead as he, Magnus Manson, and John Irving must transport the corpse of Frederick Hornby to the aptly named DEAD ROOM. It feels like it’s been a long time since we’ve seen the homophobic Lieutenant, and here he is being more insufferable than ever, threatening to have Manson locked in the corpse freezer as an alternative to lashing for his hesitancy to follow scary orders.

It’s in this corpse duty that we see Hickey’s strengths at work, comforting the childlike big’un, gaining loyalty in the ship’s underworld of low morale seamen.

Peter: I am absolutely giddy about how hard The Terror is leaning into the horror now that we’re halfway through the series. Not only are we treated with multiple on-screen amputations and the gothic splendour of semi-skulled William Heather’s grooming, but episode five gave us our first true glimpse of what we now know as Tuunbaq.

Will: This is full on survival horror. Blanky, outmatched and unarmed, takes on the creature using only his wits and his knowledge of Terror’s rigging. He even fashions a makeshift tourniquet out of rope! Scrappy, Mr. Blanky. Very scrappy.

Peter: The encounter between Blanky and Tuunbaq is absolutely thrilling. Even as a book reader who knew going into the blizzard covered confrontation that Thomas would survive, my stomach was in knots as I watched one of the most loveable characters on the show narrowly escape the razor sharp claws of evisceration.

Will: Not only do we get our first real look at the Tuunbaq, but we finally get an idea of just how big it really is. It’s huge! As big as the biggest polar bears, but… different. It’s strangely hand-like paw made short work of Blanky’s leg. The combination of kerosene and cannon-fire were enough to knock it from Terror’s rigging, although it appears to have survived the fall. I suspect it will not forget this encounter with the Ice Master.

With all the death and violence aboard the leaning ship, Silence rightfully takes the opportunity to peace out. Can you blame her? She does seem to leave behind a clue for Goodsir though. 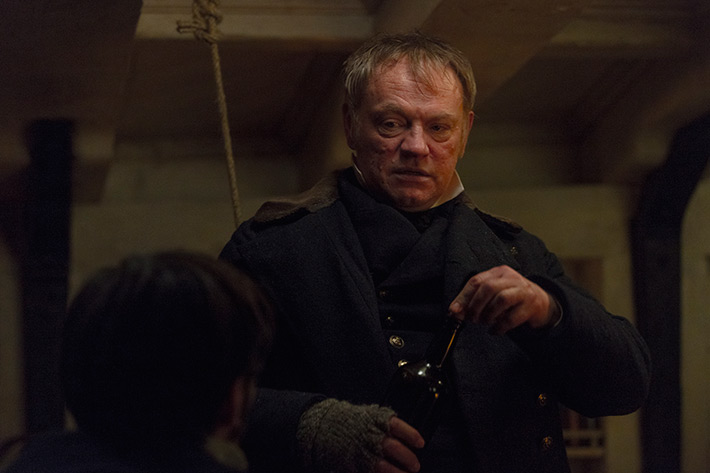 Peter: It was bound to happen. Poor old Captain Crozier is all out of whiskey, and now the miserable self-sorry man has to pull a Trainspotting at what must be the most inopportune time possible.

Will: It’s been heartbreaking to see the drink take Francis the way it has. He’s clearly a very competent captain, but having had the foresight to predict the expedition’s current predicament and been unable to prevent it has surely weighed heavily on him. I’m not surprised he and Fitzjames finally came to blows. The bottle is no escape from command, as much as Crozier might want it to be. His passion for running a tight ship has been surpassed by his taste for whiskey, and it’s taking a toll on everybody. I feel more for Terror’s officers, who’ve been shanghaied into smuggling booze, especially Lt. Little, who is walking a tightrope between following orders and enabling his captain’s bad habit.

Peter: From a viewer’s perspective, the drunken Crozier of episode five added some levity to an extremely dark and gruesome hour of television. Jared Harris’ moon-faced smile and cartoonish scheming lightened the mood in his earlier scenes, only to be undercut later when his inebriation betrayed his authority and gave rise to conflict. I’m excited to see how this show depicts Crozier’s painful detox, though I dread to think what the expedition will look like when he emerges from his quarters, if indeed he does.

Peter: Poor Doctor Stanley’s never been invited to a wedding.

Will: He’s a racist and a misanthrope, but man oh man is he ever good at snipping off frostbitten toes! Eesh.

Peter: Happy to see the show finally include one of my favourite factoids from the book: shattering teeth explode in extreme cold.

Will: That is horrifying! In other news, poor dead David Young’s ring reappeared in this episode. The jewelry Mr. Goodsir was supposed to deliver to the dying lad’s sister ended up in the hands of one Cornelius Hickey, and then on the finger of Hickey’s on-again, off-again lover Edward Gibson. He obviously pilfered it from Young’s body during burial duty. Sneaky.

Peter: On another Hickey-ish note: you and I have had some conversations about the ethics of imposing villainous behavior on these real dead men through the fictionalizing of a real life disaster. I feel like we’re about to enter into territory where that topic will be unavoidable, as we cross the threshold into the back half of the series.

Will: The Tuunbaq attack wasn’t the scariest part of this episode to me. A thrilling sequence, as you say, but the true horror aboard Terror for me is in the ship’s hold, steadily filling up with rat-eaten corpses. I’m with Mr. Manson – don’t make me go down there.

Peter: “It’s alright Manson. He’s stone.” The Gothic horror at work in this episode was delightful. For me, the prize for most skin-crawly moment was seeing the strange apparatus being used to keep William Heather’s exposed brain from freezing: a small candle and a white curtain draped over the man’s forehead.

Will: And now for a bit of a deep dive on a passing moment from this episode. While trying to calm down Francis after his spat with Fitzjames, Mr. Blanky makes mention of an incident involving Sir John Ross (Game of Thrones’ Clive Russell) at a place called Fury Beach. The Fury Beach incident has been largely clouded by history, but contemporaneous accounts of Ross’s second Arctic voyage seem to hint that his starving men nearly mutinied against him just before rescue came. Blanky’s comparison to Crozier’s current behaviour is apt. John Ross was known as a stern commander who demanded obedience because of rank but offered his crew little in return during desperate times.