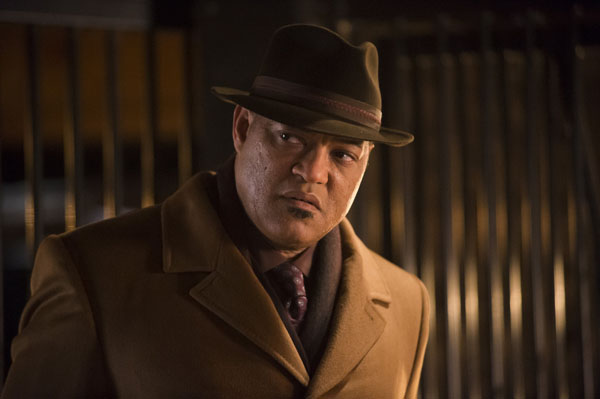 In his novel Red Dragon, Thomas Harris once described Jack Crawford as a “fisher of men.” We begin “Su-Zakana” by following two parallel sets of footprints through the snow, coming to a hole around which Crawford, the FBI Agent in Charge of the Behavioural Sciences Division, is taking a much needed break to fish for trout with his newly liberated friend, Will Graham.

In the low winter light the two speak in metaphors. Jack wishes he knew how to catch a fish that isn’t hungry, and Will agrees that it is difficult, listing off ways to try and instill hunger (live bait, deranged orderlies sent to kill the fish and steal their reputations). After some talk, and watching the lines, Will espouses that in order to catch a fish that is no longer hungry, the fisherman must engineer a situation in which only he and the fish exists.

A calm and contemplative scene, this opening is a much desired reprieve from the constant stress that was the first half of season two. The fact that it is so thematically concentrated is a common symptom of Hannibal firing on all cylinders, the dialogue and secondary action acting as symbols of exposition while actually letting the characters (and the audience) breathe for a moment.

It ends with a restatement of intent, Jack rising to the mythic form of his character’s original design:

The trout that the men catch make it to the business end of Hannibal Lecter’s kitchen by the next scene. He cleans them and prepares them, the first time cooking on screen with meat that can be confirmed as not made of people and only metaphorically representing human beings.

Hannibal serves his guests, Will and Jack, hoping aloud that their decision to bring their own meat is not a leftover suspicion for his cannibalism. Jack gives assurance that there are no more doubts about his innocence and Lecter urges them all as friends to move past apologies and forgiveness: Chilton’s victims (he was the Chesapeake Ripper, after all) reach beyond the numbered dead. The precious relationships between the three diners was mutilated by the Ripper, and it is a time for rebirth.

They eat the delicious fish and Hannibal wears the repressed face of a serious man filled with joy. Either the fish is people or (even better) he finally has his Will back.

Speaking of rebirth, “Su-Zakana” is a long awaited return to the classic Hannibal structure. A thematically appropriate case of the week emerges as a veterinarian is ushered through some stables to a dead horse that looks pregnant. Examining the stitches across the animal’s belly, one of the men wonders what kind of joker performs a c-section and leaves a baby horse inside, but when he reopens the incision a dead lady falls out and the titles roll.

Hannibal, Jack and an FBI dispatch are at the stables when we return from commercials and it is revealed that the woman inside the horse’s womb was placed in her cocoon post-mortem, and that whoever did this to her (the Han Solo to her frozen Luke Skywalker) strangled the life from her first.

This was intended to be a birth, according to Hannibal, who is always so poetic at crime scenes. The diagnosis fits pretty well with Crawford’s pronouncement off the top of the scene that this sort of thing is always very occult-flavoured.

From the stables we are brought to the aquarium, as the big bad of the remainder of season two is teasingly introduced. A table with live fish and eels swimming in it is pushing against the face of a tortured Margot Verger. Her demented brother wrings tears out of her to flavour his three-olive martini.

We don’t see his face, just the ring on his finger and the drinks that make him so hateable. Mason Verger (Michael Pitt) regretfully instructs his sister, “You should have taken the chocolate, Margot.”

There is no explanation as to what this means, but the encounter sends the abused sibling to the office of Hannibal Lecter, where she becomes the most intriguing part of the episode. Margot, arm in a sling walks the finest of lines in therapy, confessing attempted murder and cautiously implying that even though she isn’t actually planning to murder her brother, if she were she couldn’t tell her psychiatrist.

Hannibal jokes that it might have been more therapeutic if she had killed her tear-drinking brother, instantly evoking the last time someone wondered about causing death and pain to others in the confines of his office. Margot’s psychiatrist is the kind of person who will encourage a cancerous woman to commit suicide just to see it happen before reviving her to suffer a fate worse than what she was escaping. Ms. Verger’s thirst for revenge is in good hands.

We are then treated to a really artful display of sex between Alana and Hannibal, something that the show must be very careful about showing lest it humanize this devil in the sack too much. It succeeds in keeping things dark, passionate and upsetting while still introducing the idea of Hannibal as a sexual being, which will be really important by the time Clarice Starling enters the picture (many years from now), and we will be asked to believe that people can love the cannibal once portrayed by a gross Anthony Hopkins in that way.

Postcoitally, Bloom and Lecter talk about Will. Hannibal skirts around the topic of his villainy, successfully explaining their mutual friend’s motivations for attempted murder. Masking guilt with shared grief, he wonders if a door has been opened in Will that can not be closed. Graham has been reborn, but he is not unchanged.

In the CSI lab it is practical studies in rebirth symbols as Jimmy and Brian get some great in utero banter in on sharks that eat their fetal siblings and human twin absorption before finding a live bird stuffed under the heart of the horse baby victim Sarah Carver. It flies out, perching above everyone and shakes off the gore.

Will gets some time alone in the stables where for the first time as a free man he can do his metronome trick. In the shoes of the killer, he is compelled to calm the victim, having taken her life and wanting to give it back to her.

When Will snaps out of it, he tells Jack that whoever did this knew both the horse and Sarah. The killer fancies himself a healer.

The investigation spreads to a shed on Black Briar Stables grounds, where Peter, a worker with severe head trauma played by guest star Jeremy Davies, keeps all varieties of exotic animals. Davies’ performance is heightened and theatrical, contorting so that he can’t witness his own motion while under stress. It is very contemporary dance, and adds a dreamlike quality to the scenes he is in.

Despite all signs pointing to Peter, Will doesn’t buy it. He sees too much of himself in the poor stable hand.

Afterward, at his standing appointment with Hannibal, Will pleads with the killer that used him not to pretend anymore. He is fine with sins of omission, but Hannibal’s lies are unnecessary and disrespectful when speaking with the man he once destroyed. Lecter agrees as long as the courtesy is returned.

Lecter gets Will to admit that he still fantasizes about murdering him, specifically with his own hands, but that he has realized a truth about himself that can allow Hannibal some ease.

“I don’t want to kill you anymore, Dr. Lecter, now that I finally find you interesting.”

This is truly Will transformed. During their first breakfast conversation in the first episode “Aperitif,” Graham deflected Hannibal’s offer of friendship, telling him, “I don’t find you that interesting.”

The doctor knowingly replied with a prophetic, “You will,” and now, finally these two – once described by Hannibal as a mongoose and a fearful snake – can see each other on equal levels. The abusive relationship can begin all over again, this time with players of equal understanding.

The FBI uncover 15 more dead bodies presumably killed by Peter, and when Will comes to check everything out, Brian sees an opportunity for rebirth too. He confronts Will and apologizes, but Will understands. The evidence was compelling.

Back in therapy, Margot is still trying to find help in her familial dilemma. Dr. Lecter assures her that no matter how weird she thinks she is, he is much weirder than she has ever been, and after she expresses her feelings of anger and helplessness he suggests that perhaps he should find someone who can stop this nightmare for her.

Will pays a visit to Peter to talk about the bird. He is alone and wants so badly to give this reflection of himself the benefit of the doubt. What he finds is a sweet man who is being taken advantage of by a shadow who Peter is convinced will make everyone believe in his guilt.

This leads Peter’s social worker, Mr. Ingram, to the interrogation room (a new one since the other presumably still has Chilton on the walls). Alana tests the man’s emotions while Jack, Hannibal and Will observe from behind glass. This interviewee is not cooperating and exhibiting some signs of being a psychopath, but it is not enough for Jack to go on Will’s hunch.

After Ingram leaves, Peter finds him in the stables standing overtop of a dead horse and we cut to a rare in-car scene. Hannibal is driving to Black Briar Stables, Will in the passenger seat, as they talk about their relationship and listen to Gabriel Fauré. Graham sorrowfully announces that he is alone in the darkness, but Hannibal needs to impress upon his reborn friend that this is not the case.

“You’re not alone, Will. I’m standing right beside you.”

The buddy not-cops find Peter’s animals have all been released and make it to the stables just as Jeremy Davies finishes stitching up the womb of the horse that once kicked him in the head.

Will dryly asks Peter if his social worker is in that horse and when the answer is yes, he takes the poor man back to his shed while Hannibal keeps watch over the nesting corpses. Graham envies Peter’s hate, which must have made killing his own personal Hannibal Lecter much easier.

Peter is quick to say that Ingram is not actually dead, just being forced to experience empathy.

Back in the stables the psycho social worker awakens and rips his way out of the womb as Hannibal watches in comical surprise. He advises Ingram to crawl back in the womb, but after vomiting up horse-birth the lesser of two evils is confronted by the barrel of Will Graham’s gun.

Will instructs Ingram to pick up the hammer, I assume to make it believable that the forthcoming shots were fired in self defence. Hannibal breaks out the conflict resolution, pleading with Will, saying that killing Peter’s abuser will not feel like killing him, the real source of his pain. This is not the reckoning he promised himself.

Finally, Lecter puts his hand over the pistol and takes responsibility for Will’s rebirth.

The snake and the mongoose embrace as Hannibal pins a button on the episode’s metaphor. This season has been transformation for not only Will and Hannibal, but the nature of the show. Finally the cocoon constructed of mystery novel pages, fond pop-culture memories, Hollywood disappointments and countless other symbols has cracked open, and out of it has come a new kind of butterfly.

No one can explain this better than the eponymous devil himself:

“With all my knowledge and intuition I could never entirely predict you,” explains Hannibal Lecter as he close the episode. “I can feed the caterpillar, I can whisper through the chrysalis but what hatches follows his own nature and is beyond me.”